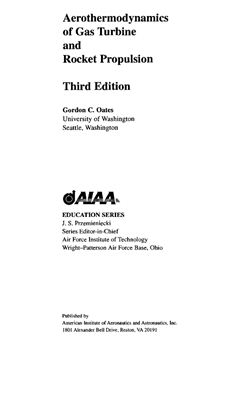 Third Edition
American Institute of Aeronautics and Astronautics, Inc., 1998.
459 p.
ISBN 1-56347-241-4
The revised and enlarged text of Aerothermodynamics of Gas Turbine and Rocket Propulsion by the late Gordon C. Oates, published in 1988, continued to fulfill the need for a comprehensive, modem book on the principles of propulsion, both as a textbook for propulsion courses and as a reference for the practicing engineer. The original edition of this book was published in 1984 as the second volume of the then newly inaugurated AIAA Education Series.The Third Edition of this text adds now a companion software representing a set of programs for use with the problems and design analyses discussed in the book. The revised and enlarged edition contained major modifications to the original text, and some of the text was rearranged to improve the presentation. Chapter 5 included performance curves, design parameters values, and illustrations of several typical modem turbofan engines. Chapter 7 included a method of analysis to account for the effect of nonconstant specific heats in the cycle analysis equations, and in Chapter 8 a new section was added for an analysis of engine behavior during transient operation. For completeness, Appendices A and B were added: Standard Atmosphere and SAE (Society of Automotive Engineers) Gas Turbine Engine Notation. The Third Edition now has Appendix C, which gives an overview of the companion software. The AIAA Education Series of textbooks and monographs embraces a broad spectrum of theory and application of different disciplines in aeronautics and astronautics, including aerospace design practice. The series includes texts on defense science, engineering, and management. The complete list of textbooks published in the series (over 50 titles) can be found following page
456. A typical book in the series presents subject material tutorially, discussing the fundamental principles and concepts, and additionally gives perspective on the state of the art. Thus the series serves as teaching texts as well as reference materials for practicing engineers, scientists, and managers.
Смотрите также

Cambridge University Press, 2006. 598 p. ISBN-10:0521858100 This book begins with a review of basic thermodynamics and fluid mechanics principles to motive their application to aerothermodynamics and real-life design issues. The approach is ideal for the reader who will face practical situations and design decisions in the gas turbine industry. Among its features are an emphasis on the role of entropy in assessing machine performance, a timely...

Elsevier Science Ltd., 2003 - 230 p. ISBN: 0-08-044273-0 This book describes the thermodynamics of gas turbine cycles. The search for high gas turbine efficiency has produced many suggestions for variations on the simple open circuit plant.

AIAA, 2006. 867 p. ISBN1563477793 This text provides a complete introduction to gas turbine and rocket propulsion for aerospace and mechanical engineers. Building on the very successful Elements of Gas Turbine Propulsion, textbook coverage has been expanded to include rocket propulsion and the material on gas dynamics has been dramatically improved. The text is divided into four parts: basic concepts and gas dynamics; analysis of rocket propuls...

Arun K. Sehra and Jaiwon Shin Glenn Research Center, Cleveland, Ohio Propulsion innovations have been the fundamental driver to progress in air transportation. Enormous advances in propulsion performance and efficiency have made it possible for aircraft to travel at higher speeds over longer ranges while carrying larger payloads. This has increased capacity by orders of magnitude since the advent of air travel. The FAA and commercial sectors ar...