Cooper B. Eric Voegelin and the Foundations of Modern Political Science 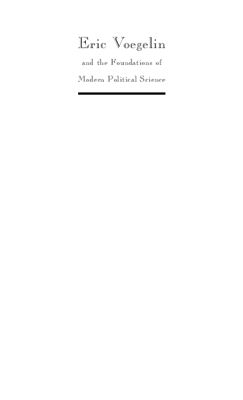 This important new work is a major analysis of the foundation of Eric Voegelin's political science. Barry Cooper maintains that the writings Voegelin undertook in the 1940s provide the groundwork for the brilliant book that is one of his best known, The New Science of Politics. At the time of that book's publication, however, few were aware of the enormous knowledge and accomplished scholarship that lay behind its illuminating, although sometimes baffling, formulations.

By focusing on several of the key chapters in Voegelin's eight- volume History of Political Ideas, especially the studies of Bodin, Vico, and Schelling, Cooper shows how those studies provide the basis for Voegelin's thought. Investigating Voegelin's study of Oriental influences on Weste political "ideas," especially Mongol constitutional law, and his study of Toynbee, Cooper seeks to demonstrate the vast range of materials Voegelin used.

Cooper contends that, as with other great thinkers, political crisis, specifically the world war of 1939-1945, stimulated Voegelin's intellectual and spiritual achievement. He provides an analysis of Voegelin's immediate conce with the course of World War II, his ability to understand those dramatic events in a large context, and his ability to provide an insightful account of the causes, the significance, and the consequences of the spiritual and political disorder that was evident all around him.

In Eric Voegelin and the Foundations of Mode Political Science, Cooper makes the connection between Voegelin's political writings of the 1940s and the meditative interpretations that began to appear with the publication of Anamnesis and with the later volumes of Order and History much more intelligible than does any existing discussion of Voegelin. Scholars in intellectual history and political science will benefit enormously from this valuable new addition to Voegelin studies.
Похожие разделы
Смотрите также

Статья
Полис (Политические исследования). - 2006. - № 5. - С. 158 - 170. Harold Lasswell (1902 - 1978) is widely known in the world political science as the founder of political psychology. It was, in particular, thanks to a monograph published in 1930, Psychopathology and Politics, that he acquired that reputation. While acknowledging the book's merits, critics very soon pointed to the bias being observed in it, towards psychoanalytical interpretation...

New York, Atherton, 1963. The Future of Political Science grew out of the phenomenally rapid expansion of the study of government in the United States and elsewhere. The study of professionalism among physical scientists, lawyers, engineers, etc. was not matched by such internal examination within the social sciences until much later. Lasswells overview centered on developments in the United States. This classic covers areas ranging from members...

Melville Andrei. Political Atlas of the Modern World: An Experiment in Multidimensional Statistical Analysis of the Political Systems of Modern States

In this book, a group of leading scholars analyzes the functioning of modern democracies by focusing on two basic principles: political representation and policy congruence. Drawing on recent survey data from a variety of national and international research projects, they demonstrate how political representation works and mostly leads to a fair degree of policy congruence between citizens and their representatives. They also present new insights...

This is a significantly expanded edition of one of the greatest works of modern political theory. Sheldon Wolin's Politics and Vision inspired and instructed two generations of political theorists after its appearance in 1960. This new edition retains intact the original ten chapters about political thinkers from Plato to Mill, and adds seven chapters about theorists from Marx and Nietzsche to Rawls and the postmodernists. The new chapters, which...