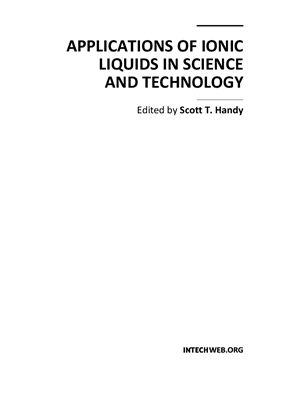 This volume of the two volume set on ionic liquids focuses on the applications of ionic liquids in a growing range of areas. Throughout the 1990’s, it seemed that most of the attention in the area of ionic liquids applications was directed toward their use as solvents for organic and transition-metal-catalyzed reactions. Certainly this interest continues on to the present date, but the most innovative uses of ionic liquids span a much more diverse field than just synthesis. Some main topics of coverage include the application of RTILs in various electronic applications (batteries, capacitors, and light emitting materials), polymers (synthesis and functionalization), nanomaterials (synthesis and stabilization), and separations. More unusual applications can be noted in the fields of biomass utilization, spectroscopy, optics, lubricants, fuels, and refrigerants. It is hoped that this diversity of this volume will serve as an inspiration for even further advances in the use of RTILs.

Baird C. Chemistry in Your Life

2nd Edition - W. H. Freeman, 2006. - 750 pages. Chemistry in Your Life is designed for liberal arts students who are required to take a science course, but do not necessarily have a strong background in chemistry or science. The book ties every chemistry concept to things familiar to students - nutrition, drugs, the environment, household items. Rather than wait until the end of the text to apply chemistry to relavant topics, Chemistry In Your L...

Academic Press. 2000. 993 p. Here is the most comprehensive and up-to-date treatment of one of the hottest areas of chemical research. The treatment of fundamental kinetics and photochemistry will be highly useful to chemistry students and their instructors at the graduate level, as well as postdoctoral fellows entering this new, exciting, and well-funded field with a Ph.D. in a related discipline (e.g., analytical, organic, or physical chemistr...

Teacher Ideas Press 1998. - 259 Pages This work integrates chemistry and art, enabling students to understand how the science of chemistry is involved in the creation of art. Topics include: colour paint; supports and grounds; clay, sculpture and organic chemistry; jewellery; photography; art forgery; and chemical hazardsrn

2nd ed. W.H.Freeman and Company. 2009. 508 p. In its new second edition, Investigating Chemistry: A Forensic Science Perspective remains the only book that uses the inherently fascinating topics of crime and criminal investigations as a context for teaching the fundamental chemical concepts most often covered in an introductory nonmajors course. Covering all the standard topics, Matthew Johll capitalizes on the surge of interest in the scientifi...

Elsevier. 2004. 589 p. Vlth International Conference on Femtochemistry Maison de la Chimie, Paris, France. July 6-10, 2003 This book gives a very good account of this fast-growing field, in which new research directions are constantly opening up. In summary, this is a very valuable book, which reflects the knowledge of ultra fast molecular events obtained by many research groups around the world and presented at the VIth International Conferenc...

Wiley Publishing, Inc., 2008. - 344 pages From liquids and solids to acids and bases - work chemistry equations and use formulas with ease Got a grasp on the chemistry terms and concepts you need to know, but get lost halfway through a problem or, worse yet, not know where to begin? Have no fear - this hands-on guide helps you solve many types of chemistry problems in a focused, step-by-step manner. With problem-solving shortcuts and lots of pr...

Springer, 2011. - 311 pages Archaeological chemistry is a subject of great importance to the study and methodology of archaeology. This comprehensive text covers the subject with a full range of case studies, materials, and research methods. With twenty years of experience teaching the subject, the authors offer straightforward coverage of archaeological chemistry, a subject that can be intimidating for many archaeologists who do not already ha...