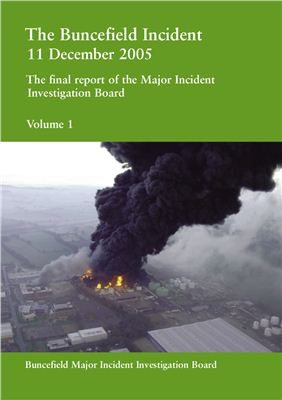 In the early moing of Sunday 11 December 2005, a series of explosions followed by a large fire destroyed large parts of the Buncefield Oil Storage and Transfer Depot and caused widespread damage to homes and businesses surrounding the site.
The then Health and Safety Commission (now Health and Safety Executive) appointed a Major Incident Investigation Board with an independent chair, Lord Newton of Braintree. This was a new departure in major incident investigation which allowed the Board to contact individuals and organisations who were affected or who had expert knowledge and experience, and to keep the public informed of progress with frequent reports.
This is the ninth and final report of the Buncefield Major Incident Investigation Board. It is made to the Boards of the Health and Safety Executive and the Environment Agency that together form the joint Competent Authority responsible for regulating the Buncefield site.

Volume 1 draws attention to some of the ways the Board has set about its business. It explains the significance of the Buncefield Depot and describes briefly how the explosions and fires happened and the damage they caused. It also summarises all the Board’s recommendations to regulators, industry and govement.

Volume 2 brings together all the Board’s previous reports in a single publication for the public record and for future reference: three progress reports; an Initial Report; a report into the explosion mechanism; and reports giving recommendations on design and operation of fuel storage sites, emergency preparedness for, response to and recovery from incidents, and land use planning and the control of societal risk around major hazard sites.
Похожие разделы
Смотрите также

Kletz T. What Went Wrong? Case Histories of Process Plant Disasters and How They Could Have Been Avoided

Butterworth-Heinemann; 5 edition. 2009. 640p "What Went Wrong?" has revolutionized the way industry views safety. The new edition continues and extends the wisdom, innovations and strategies of previous editions, by introducing new material on recent incidents, and adding an extensive new section that shows how many accidents occur through simple miscommunications within the organization, and how strightforward changes in design can often remove...