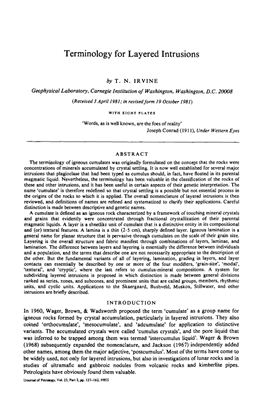 ABSTRACT
The terminology of igneous cumulates was originally formulated on the concept that the rocks were concentrations of minerals accumulated by crystal settling. It is now well established for several major intrusions that plagioclase that had been typed as cumulus should, in fact, have floated in its parental magmatic liquid. Nevertheless, the terminology has been valuable in the classification of the rocks of these and other intrusions, and it has been useful in certain aspects of their genetic interpretation. The name 'cumulate' is therefore redefined so that crystal settling is a possible but not essential process in the origins of the rocks to which it is applied. The overall nomenclature of layered intrusions is then reviewed, and definitions of names are refined and systematized to clarify their applications. Careful distinction is made between descriptive and genetic names.
A cumulate is defined as an igneous rock characterized by a framework of touching mineral crystals and grains that evidently were concentrated through fractional crystallization of their parental magmatic liquids. A layer is a sheetlike unit of cumulate that is a distinctive entity in its compositional and (or) textural features. A lamina is a thin (2-5 cm), sharply defined layer. Igneous lamination is a general name for planar structure that is pervasive through cumulates on the scale of their grain size. Layering is the overall structure and fabric manifest through combinations of layers, laminae, and lamination. The difference between layers and layering is essentially the difference between individuals and a population, and the terms that describe one are not necessarily appropriate to the description of the other. But the fundamental variants of all of layering, lamination, grading in layers, and layer contacts can essentially be described by one or more of the four modifiers, 'grain-size', 'modal', 'textural', and 'cryptic', where the last refers to cumulus-mineral compositions. A system for subdividing layered intrusions is proposed in which distinction is made between general divisions ranked as series, zones, and subzones, and prominent units that are called groups, members, rhythmic units, and cyclic units. Applications to the Skaergaard, Bushveld, Muskox, Stillwater, and other intrusions are briefly described.
Похожие разделы
Смотрите также

Elsevier, 2011, 670 pages Ultrahigh pressure metamorphism (UHPM) is a relatively new but fast growing discipline related to the deep subduction of slabs of continental and/or oceanic crust into the Earth's mantle and their return towards the surface as important components of mountain belts. The discipline was established ~25 years ago after discoveries of high pressure minerals, coesite and diamond, in the rocks of the continental affinities,...

Pracejus B. The Ore Minerals Under the Microscope. An Optical Guide

Изд-во Elsevier, 2008 г., 895 с. This is a very detailed colour atlas for ore/opaque minerals (ore microscopy) with the main emphasis on name and synonyms, mineral group, chemical composition, information about major formation environment, optical data, reflection colour/shade comparison with 4 common/standard minerals of a similar colour or grey shade, up to 5 high-quality photos for each mineral with scale, and a short description of the pictur...

Статья
Статья из Geol. Mag. 122 (5), 1985, pp. 555- 568. Printed in Great Britain Abstract - During the postcumulus stage of solidification in layered intrusions, fluid dynamic phenomena play an important role in developing the textural and chemical characteristics of the cumulate rocks. One mechanism of adcumulus growth involves crystallization at the top of the cumulate pile where crystals are in direct contact with the magma reservoir. Convection in...