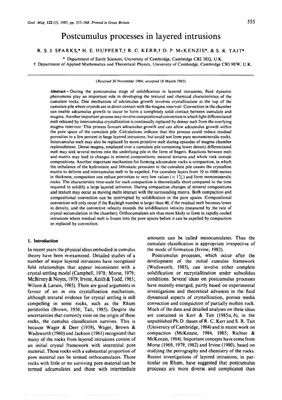 Статья из Geol. Mag. 122 (5), 1985, pp. 555-
568. Printed in Great Britain
Abstract - During the postcumulus stage of solidification in layered intrusions, fluid dynamic
phenomena play an important role in developing the textural and chemical characteristics of the
cumulate rocks. One mechanism of adcumulus growth involves crystallization at the top of the
cumulate pile where crystals are in direct contact with the magma reservoir. Convection in the chamber can enable adcumulus growth to occur to form a completely solid contact between cumulate and magma. Another important process may involve compositional convection in which light differentiated melt released by intercumulus crystallization is continually replaced by denser melt from the overlying magma reservoir. This process favours adcumulus growth and can allow adcumulus growth within the pore space of the cumulate pile. Calculations indicate that this process could reduce residual porosities to a few percent in large layered intrusions, but could not form pure monomineralic rocks. Intercumulus melt may also be replaced by more primitive melt during episodes of magma chamber replenishment. Dense magma, emplaced over a cumulate pile containing lower density differentiated melt may sink several metres into the underlying pile in the form of fingers. Reactions between melt and matrix may lead to changes in mineral compositions, mineral textures and whole rock isotope compositions. Another important mechanism for forming adcumulate rocks is compaction, in which the imbalance of the hydrostatic and lithostatic pressures in the cumulate pile causes the crystalline matrix to deform and intercumulus melt to be expelled. For cumulate layers from 10 to 1000 metres in thickness, compaction can reduce porosities to very low values ( 1 %) and form monomineralic rocks. The characteristic time-scale for such compaction is theoretically short compared to the time
required to solidify a large layered intrusion. During compaction changes of mineral compositions
and texture may occur as moving melts interact with the surrounding matrix. Both compaction and compositional convection can be interrupted by solidification in the pore spaces. Compositional convection will only occur if the Rayleigh number is larger than 40, if the residual melt becomes lower in density, and the convective velocity exceeds the solidification velocity (measured by the rate of crystal accumulation in the chamber). Orthocumulates are thus more likely to form in rapidly cooled intrusions where residual melt is frozen into the pore spaces before it can be expelled by compaction or replaced by convection.
Похожие разделы
Смотрите также

Elsevier, 2011, 670 pages Ultrahigh pressure metamorphism (UHPM) is a relatively new but fast growing discipline related to the deep subduction of slabs of continental and/or oceanic crust into the Earth's mantle and their return towards the surface as important components of mountain belts. The discipline was established ~25 years ago after discoveries of high pressure minerals, coesite and diamond, in the rocks of the continental affinities,...

Cambridge University Press. The Edinburgh Building, Cambridge, UK. 2006 Processes involved in the development of igneous and metamorphic rocks involve some combination of crystal growth, solution, movement and deformation, which is expressed as changes in texture (microstructure). Recent advances in the quantification of aspects of crystalline rock textures, such as crystal size, shape, orientation and position, have opened new avenues of researc...

Статья
Geophysical Laboratory, Carnegie Institution of Washington, Washington, D.C. 20008 ABSTRACT The terminology of igneous cumulates was originally formulated on the concept that the rocks were concentrations of minerals accumulated by crystal settling. It is now well established for several major intrusions that plagioclase that had been typed as cumulus should, in fact, have floated in its parental magmatic liquid. Nevertheless, the terminology ha...

Pracejus B. The Ore Minerals Under the Microscope. An Optical Guide

Изд-во Elsevier, 2008 г., 895 с. This is a very detailed colour atlas for ore/opaque minerals (ore microscopy) with the main emphasis on name and synonyms, mineral group, chemical composition, information about major formation environment, optical data, reflection colour/shade comparison with 4 common/standard minerals of a similar colour or grey shade, up to 5 high-quality photos for each mineral with scale, and a short description of the pictur...