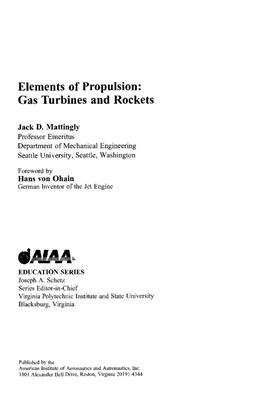 This text provides a complete introduction to gas turbine and rocket propulsion for aerospace and mechanical engineers. Building on the very successful Elements of Gas Turbine Propulsion, textbook coverage has been expanded to include rocket propulsion and the material on gas dynamics has been dramatically improved. The text is divided into four parts: basic concepts and gas dynamics; analysis of rocket propulsion systems; parametric (design point) and performance (off-design) analysis of air breathing propulsion systems; and analysis and design of major gas turbine engine components (fans, compressors, turbines, inlets, nozzles, main buers, and afterbuers).
Design concepts are introduced early (aircraft and rocket performance in an introductory chapter) and integrated throughout. Written with extensive student input on the design of the book, the book builds upon definitions and gradually develops the thermodynamics, gas dynamics, rocket engine analysis, and gas turbine engine principles. The book contains over 100 worked examples and numerous homework problems so concepts are applied after they are introduced. Over 600 illustrations and pictures show basic concepts, trends, and design examples.
Eight computer programs accompany the text, which allow for rapid calculation of trends, what if questions, conceptual design, homework problems, and homework verification. The software runs in the Windows operating system on PC-compatible systems.
About the Author Jack D. Mattingly received his B.S. and M.S. in Mechanical Engineering from the University of Notre Dame, and his Ph.D. in Aeronautics and Astronautics at the University of Washington. While studying for his doctorate under Gordon C. Oates, he pioneered research in the mixing of coannular swirling flows and developed a major new test facility. During his 40 years of experience in analysis and design of propulsion and thermodynamic systems, he has written two engineering textbooks, developed aerothermodynamic cycle analysis models, and created engineering software for air-breathing propulsion systems. Dr. Mattingly was previously at the Aero Propulsion Laboratory at Wright-Patterson AFB where he directed exploratory and advanced development programs aimed at improving the performance, reliability, and durability of gas turbine engine components. He retired from active duty with the U.S. Air Force in 1989 and joined the faculty of Seattle University. In 2000 he retired from Seattle University as Professor Emeritus in Mechanical Engineering to dedicate his efforts to writing this textbook and a new edition of Aircraft Engine Design, teaching short courses, and consulting. Dr. Mattingly has more than 35 years of experience in Engineering Education, earlier as a senior member of the Department of Aeronautics at the United States Air Force Academy, where he established a top undergraduate propulsion program. In addition, he has taught and done research in propulsion and thermal energy systems at the Air Force Institute of Technology, University of Washington, University of Notre Dame, University of Wisconsin, and IBM Corp. He was also founder of the AIAA/Air Breathing Propulsion Team Aircraft Engine Design Competition for undergraduate students. Among his many distinguished teaching awards is Outstanding Educator for 1992 from Seattle University. Having published more than 25 technical papers, articles, and textbooks in his field, Dr. Mattingly authored Elements of Gas Turbine Propulsion (1995) and was co-author of Aircraft Engine Design, Second Edition (2002), an unprecedented conceptual design textbook for air breathing engines that won the 2005 AIAA Summerfield Book Award.
Похожие разделы
Смотрите также

Marcel Dekker, Inc., 2003. 397 р. ISBN:0-8247-0980-2. Turbomachinery: Design and Theory offers an introduction to the subject ofturbomachinery and is intended to be a text for a single-semester course for seniorundergraduate and beginning graduate students in mechanical engineering,aerospace engineering, chemical engineering, design engineering, and manufacturing engineering. This book is also a valuable reference to practicingengineers in the f...

Third Edition American Institute of Aeronautics and Astronautics, Inc., 1998. 459 p. ISBN 1-56347-241-4 The revised and enlarged text of Aerothermodynamics of Gas Turbine and Rocket Propulsion by the late Gordon C. Oates, published in 1988, continued to fulfill the need for a comprehensive, modem book on the principles of propulsion, both as a textbook for propulsion courses and as a reference for the practicing engineer. The original edition of...

Arun K. Sehra and Jaiwon Shin Glenn Research Center, Cleveland, Ohio Propulsion innovations have been the fundamental driver to progress in air transportation. Enormous advances in propulsion performance and efficiency have made it possible for aircraft to travel at higher speeds over longer ranges while carrying larger payloads. This has increased capacity by orders of magnitude since the advent of air travel. The FAA and commercial sectors ar...

Butterworth-Heinemann, 2006. 504 p. ISBN:0123693942 Chemical propulsion comprises the science and technology of using chemical reactions of any kind to create thrust and thereby propel a vehicle or object to a desired acceleration and speed. This book focuses on recent advances in the design of very highly efficient, low-pollution-emitting propulsion systems, as well as advances in testing, diagnostics and analysis. It offers unique coverage of...