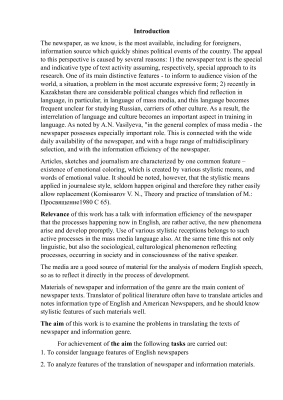 6 стр.
(Автор и выходные данные не указаны). "The newspaper, as we know, is the most available, including for foreigners, information source which quickly shines political events of the country. The appeal to this perspective is caused by several reasons: 1) the newspaper text is the special and indicative type of text activity assuming, respectively, special approach to its research. One of its main distinctive features - to inform to audience vision of the world, a situation, a problem in the most accurate expressive form; 2) recently in Kazakhstan there are considerable political changes which find reflection in language, in particular, in language of mass media, and this language becomes frequent unclear for studying Russian, carriers of other culture. As a result, the interrelation of language and culture becomes an important aspect in training in language. As noted by A.N. Vasilyeva, "in the general complex of mass media - the newspaper possesses especially important role. This is connected with the wide daily availability of the newspaper, and with a huge range of multidisciplinary selection, and with the information efficiency of the newspaper". . .
Похожие разделы