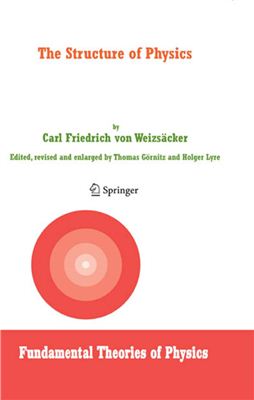 Springer, 2006. - 360 pp.
Carl Friedrich von Weizs?cker's "Aufbau der Physik", first published in 1985, was intended as an overview of his lifelong conce: an understanding of the unity of physics. That is, the idea of a quantum theory of binary alteatives (the so-called ur-theory), a unified quantum theoretical framework in which spinorial symmetry groups are considered to give rise to the structure of space and time. The book saw numerous reprints, but it was published in German only. The present edition, in English, provides a newly arranged and revised version, in which some original chapters and sections have been deleted, and a new chapter about further insights and results of ur-theoretic research of the late 1980's and 1990's, mainly by the work of Thomas G?itz, has been included, as well as a general introduction to Weizs?cker's Philosophy of Physics. Carl Friedrich von Weizs?cker also enjoys high esteem by a much broader audience for his socio-cultural, political and religious thoughts and writings. In him the intercultural and interdisciplinary dialogue has found one of its most important proponents: a great thinker who combines the perspectives of science, philosophy, religion and politics with a view towards the challenges as well as the responsibilities of our time.
Похожие разделы
Смотрите также

Camilleri Kristian. Constructing the Myth of the Copenhagen Interpretation

Статья
Publisher: MIT Press. Perspectives on Science. Volume 17, Number 1, Spring 2009. E-ISSN: 1530-9274 Print ISSN: 1063-6145. Subject Headings: Physics - Philosophy. Quantum theory. Abstract: According to the standard view, the so-called ‘Copenhagen interpretation’ of quantum mechanics originated in discussions between Bohr and Heisenberg in 1927, and was defended by Bohr in his classic debate with Einstein. Yet recent scholarship has shown Bohr’s vi...

Princeton University Press, 2008. - 526 Pages. Plato's Ghost is the first book to examine the development of mathematics from 1880 to 1920 as a modernist transformation similar to those in art, literature, and music. Jeremy Gray traces the growth of mathematical modernism from its roots in problem solving and theory to its interactions with physics, philosophy, theology, psychology, and ideas about real and artificial languages. He shows how ma...

Cambridge University Press, 2011. - 311 pages. The infinite! No other question has ever moved so profoundly the spirit of man; no other idea has so fruitfully stimulated his intellect; yet no other concept stands in greater need of clarification than that of the infinite. - David Hilbert This interdisciplinary study of infinity explores the concept through the prism of mathematics and then offers more expansive investigations in areas beyond ma...

John Wiley & Sons, 1974. - 536 pp. Everyone who has studied quantum physics and is interested in its "philosophical foundations" has no doubt picked up this book, if not to study it in detail, certainly to at least briefly peruse its contents. It is the most widely cited of all books on the philosophy of quantum physics, and apart from discussing the issues most effectively, it also could be used as an introduction to graduate-level quantum p...

University Of Chicago Press, 1996. - 226 p. It’s been almost a half-century since the publication of Thomas S. Kuhn’s The Structure of Scientific Revolutions, a slim little book that introduced the word paradigm into common parlance and shattered our conventional way of looking at change. Fifty years on, it still represents perhaps the best thinking on how transformation happens, who drives it, why it’s so vehemently resisted, and what it reall...

Publisher : MIT press. Perspectives on Science. Volume 16, Number 1, Spring 2008. E-ISSN: 1530-9274 Print ISSN: 1063-6145. 26 pages. Subject Headings: Debates and debating. Science - Philosophy. Colliders (Nuclear physics) - Philosophy. Knowledge, Theory of. Summary: For philosophers of science interested in elucidating the social character of science, an important question concerns the manner in which and degree to which the objectivity of scien...

World Scientific Pub, 2011. - 294 pages. This book provides an interdisciplinary introduction to the notion of fractal time, starting from scratch with a philosophical and perceptual puzzle. How subjective duration varies, depending on the way we embed current content into contexts, is explained. The complexity of our temporal perspective depends on the number of nestings performed, i.e. on the number of contexts taken into account. This tempora...