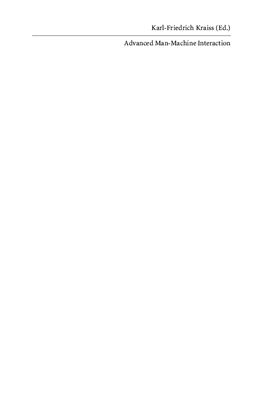 The way in which humans interact with machines has changed dramatically during the last fifty years. Driven by developments in software and hardware technologies new appliances never thought of some years ago appear on the market. There are apparently no limits to the functionality of personal computers or mobile telecommunication appliances. Intelligent traffic systems promise formerly unknown levels of safety. Cooperation between factory workers and smart automation is under way in industrial production. Telepresence and teleoperations in space, under water or in micro worlds is made possible. Mobile robots provide services on duty and at home. As, unfortunately, human evolution does not keep pace with technology, we face problems in dealing with this brave new world. Many individuals have experienced minor or major calamities when using computers for business or in private. The elderly and people with special needs often refrain altogether from capitalizing on mode technology. Statistics indicate that in traffic systems at least two of three accidents are caused by human error.
In this situation man-machine interface design is widely recognized as a major challenge. It represents a key technology, which promises excellent pay-offs. As a major marketing factor it also secures a competitive edge over contenders. The purpose of this book is to provide deep insight into novel enabling technologies of man-machine interfaces. This includes multimodal interaction by mimics, gesture, and speech, video based biometrics, interaction in virtual reality and with robots, and the provision of user assistance. All these are innovative and still dynamically developing research areas.
The concept of this book is based on my lectures on man-machine systems held regularly for students in electrical engineering and computer science at RWTH Aachen University and on research performed during the last years at this chair. The compilation of the materials would not have been possible without contributions of numerous people who worked with me over the years on various topics of man-machine interaction. Several chapters are authored by former or current doctoral students. Some chapters build in part on earlier work of former coworkers as, e.g., Suat Akyol, Pablo Alvarado, Ingo Elsen, Kirsti Grobel, Hermann Hienz, Thomas Kruger, Dirk Krumbiegel, Roland Steffan, Peter Walter, and Jochen Wickel. Therefore their work deserves mentioning as well.
To provide a well balanced and complete view on the topic the volume further contains two chapters by Professor Gerhard Rigoll from Technical University of Munich and by Professor Rudiger Dillmann from Karlsruhe University. I’m very much indebted to both for their contributions. I also wish to express my gratitude to Eva Hestermann-Beyerle and to Monika Lempe from Springer Verlag: to the former for triggering the writing of this book, and to both for provided helpful support during its preparation.