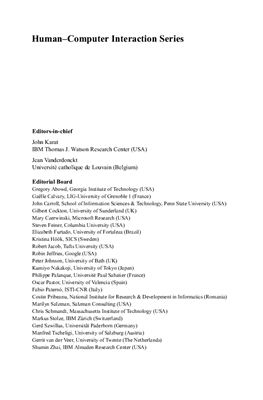 Considerable human attention is expended on operating and attending to computers, and humans are forced to spend precious time fighting technological artifacts rather than doing what they enjoy and do well: human-human interaction and communication. Instead of forcing people to pay attention to the artifact, that artifact should pay attention to humans and their interaction. Rather than forcing humans to work within a loop of computers, we would like to see computers serving in a Human Interaction Loop (CHIL). A CHIL computing environment aims to radically change the way we use computers. Rather than expecting a human to attend to technology, CHIL attempts to develop computer assistants that attend to human activities, interactions, and intentions. Instead of reacting only to explicit user requests, such assistants proactively provide services by observing the implicit human request or need, much like a personal butler would.
In 2004, a consortium of 15 laboratories from nine countries constituted itself as the CHIL Consortium to study this CHIL computing paradigm. Project CHIL, Computers in the Human Interaction Loop, was supported as an Integrated Project (IP 506909) of the European Union under its 6th Framework Program and represents one of Europe’s largest concerted efforts in the area of advanced human interfaces. It began on January 1, 2004, and ended successfully in August 2007. It was coordinated administratively by the Fraunhofer Institut f?r Informations- und Datenverarbeitung (IITB) and scientifically by the Interactive Systems Labs (ISL) at the University of Karlsruhe. The CHIL team includes leading research laboratories in Europe and the United States who collaborate to bring friendlier and more helpful computing services to society.
Instead of requiring user attention to operate machines, CHIL services attempt to understand human activities and interactions to provide helpful services implicitly and unobtrusively. To achieve this goal, machines must understand the human context and activities better; they must adapt to and lea from the human’s interests, activities, goals, and aspirations. This requires machines to better perceive and understand all the human communication signals including speech, facial expressions, attention, emotion, gestures, and many more. Based on the perception and understanding of human activities and social context, innovative context-aware and proactive computer services became possible and were explored. Several prototype services were assembled and tested for performance and effectiveness: (1) the Connector (a proactive phone/communication device), (2) the Memory Jog (for supportive information and reminders in meetings), (3) collaborative supportive workspaces and meeting monitoring.
To realize the CHIL vision, the key research activities concentrate on four central areas:
Perceptual technologies: Proactive, implicit services require a good description of human interaction and activities. This implies a robust description of the perceptual context as it applies to human interaction: Who is doing What, to Whom, Where and How, and Why. Unfortunately, such technologies – in all of their required robustness – do not yet exist. The consortium identified a core set of needed technologies and set out to build and improve them for use in CHIL services.
Data collection and evaluation: Due to the inherent challenges (open environments, free movement of people, open distant sensors, noise, etc.), technologies are advanced under an aggressive R&D regimen in a worldwide evaluation campaign. In support of these campaigns, meeting, lectures and seminar data have been collected at more than five different sites, and metrics for the technology evaluations have been defined.
Software infrastructure: A common and defined software infra-architecture serves to improve interoperability among the partners and offers a market-driven exchange of modules for faster integration.
Services: based on the emerging technologies developed at different labs, using a common architecture, and within a user-centered design framework, CHIL services are assembled and evaluated. In this fashion, first prototypes are continually being (re-)configured and the results of user studies effectively exploited. This book provides an in-depth discussion of the main research work and main results from an almost four-year effort on CHIL technologies and CHIL services. The work and insights reported represent a major advance in the state-of-the-art of mode context-aware computing and interface technologies.
A description of the CHIL framework, however, would not be complete without mentioning the excellent and constructive cooperation within the CHIL Consortium. The spirits of competitive cooperation as well as cooperative competition tued out to be key factors for the scientific achievements of CHIL.