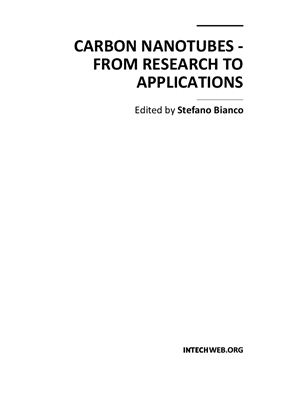 Since their discovery in 1991, carbon nanotubes have been considered as one of the most promising materials for a wide range of applications, in virtue of their outstanding properties. During the last two decades, both single-walled and multi-walled CNTs probably represented the hottest research topic conceing materials science, equally from a fundamental and from an applicative point of view. There is a prevailing opinion among the research community that CNTs are now ready for application in everyday world. This book provides an (obviously not exhaustive) overview on some of the amazing possible applications of CNT-based materials in the near future.

Springer. 2006. 270 p. The book comprises reviews on various topics of carbon nanotube research from specialists in the field, together with reports on on-going research. Both are intended to give a detailed picture of the remarkable properties of these one-dimensional nanostructures. Particular attention is paid to the synthesis, characterization, properties, and application of nanotubes. The book will be an indispensable introduction for the n...