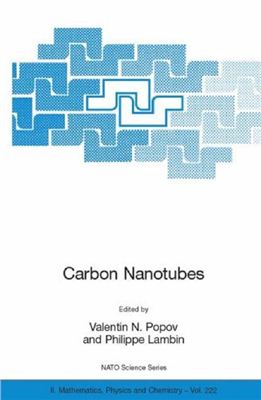 The book comprises reviews on various topics of carbon nanotube research from specialists in the field, together with reports on on-going research. Both are intended to give a detailed picture of the remarkable properties of these one-dimensional nanostructures. Particular attention is paid to the synthesis, characterization, properties, and application of nanotubes. The book will be an indispensable introduction for the newcomers in the field as well as a valuable update for researchers in the field, for it contains the most recent developments.

Wiley-VCH Verlag, Weinheim, 2010, 906 Pages In this first comprehensive compilation of review chapters on this hot topic, more than 30 experts from around the world provide in-depth chapters on their specific areas of expertise, covering such essential topics as: Block Copolymer Systems, Nanofibers and Nanotubes Helical Polymer-Based Supramolecular Films Synthesis of Inorganic Nanotubes Gold Nanoparticles and Carbon Nanotubes Recent Advances in M...

Cavendish Laboratory, and Department of Materials Science and Metallurgy, University of Cambridge, 2010. - 20 p. Electrohydrodynamic (EHD) pattern formation of carbon nanotube-polymer composite films yields well-defined patterns on the micrometer scale along with the alignment of carbon nanotubes (CNTs) within these patterns. Conductive pathways in nanotube networks formed during EHD patterning of nanocomposite films results in a substantial inc...