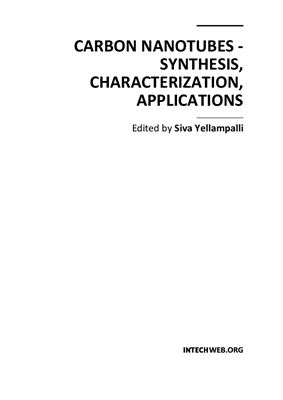 Carbon nanotubes are one of the most intriguing new materials with extraordinary properties being discovered in the last decade. The unique structure of carbon nanotubes provides nanotubes with extraordinary mechanical and electrical properties. The outstanding properties that these materials possess have opened new interesting researches areas in nanoscience and nanotechnology. Although nanotubes are very promising in a wide variety of fields, application of individual nanotubes for large scale production has been limited. The main roadblocks, which hinder its use, are limited understanding of its synthesis and electrical properties which lead to difficulty in structure control, existence of impurities, and poor processability. This book makes an attempt to provide indepth study and analysis of various synthesis methods, processing techniques and characterization of carbon nanotubes that will lead to the increased applications of carbon nanotubes.

Springer. 2006. 270 p. The book comprises reviews on various topics of carbon nanotube research from specialists in the field, together with reports on on-going research. Both are intended to give a detailed picture of the remarkable properties of these one-dimensional nanostructures. Particular attention is paid to the synthesis, characterization, properties, and application of nanotubes. The book will be an indispensable introduction for the n...