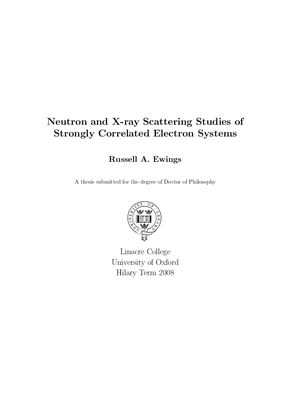 A thesis submitted for the degree of Doctor of Philosophy. Linacre College, University of Oxford, Hilary Term 2008.
In this thesis results of x-ray scattering and neutron scattering experiments on several strongly correlated transition metal oxides are presented. The prototypical charge ordered cuprate La1:48Nd0:4Sr0:12CuO4 was investigated using polarised neutron scattering. The results show that several proposed schemes for the magnetic order in this class of materials may be ruled out, however the data are consistent with one-dimensional stripe-like magnetic order. X-ray di®raction was used to show that the charge order is insensitive to an applied magnetic ?eld, but might be a®ected by the existence of superconductivity. The magnetic excitations were also studied, and at low energies a gap in the magnetic °uctuations was observed and there is tentative evidence that this is related to magnetic anisotropy. The spin state transition in LaCoO3 was investigated using neutron inelastic scattering, and excitations reminiscent of those observed in ferromagnets above their critical temperatures were observed. The debate surrounding the nature of the excited spin state, S = 1 or S = 2, could not be resolved, however. The nature of the spin excitations in La0:82Sr0:18CoO3 was investigated using polarised neutrons and it was found that at low energies the excitations take the form of spin-waves. At higher energies this mode becomes heavily damped, and several possible damping mechanisms for this are discussed. Finally, the multiferroic material DyMn2O5 was studied using x-ray resonant scattering. A complex, temperature dependent, magnetic structure was found using a Dy resonance, which re°ects an underlying order of the Mn ions. The measurements were in agreement with a theory of multiferroics based on acentric spin-density waves.
Похожие разделы
Смотрите также

Springer-Verlag, 1993. - 478 р. These notes cover the material presented in 3 Introductory Lectures at the HERCULES course for European graduate students entitled "Neutrons and Synchrotron Radiabon for Condensed Matter Studies". This title of the course calls for an introduction where the similarities and differences between Neutron and X-ray studies are presented, and that is the overall aim of the Introductory lectures. Neutron and X-ray metho...

WILEY-VCH, 2004, 238p. A First-Principles Scheme for Calculatingv the Electronic Structure of Strongly Correlated Materials: GW+DMFT A Many-body Approach to the Electronic and Optical Properties of Copper and Silver Correlation Spectroscopy of Nano-size Materials Electron–Electron Coincidence Studies on Atomic Targets: A Review of (e,2e) and (e,3e) Experiments Studying the Details of the Electron–Electron Interaction in Solids and Surfaces Two-El...

3rd edition, Springer Science+Business Media, New York, 2011, 491 pages Within the last 30 years, electron energy-loss spectroscopy (EELS) has become a standard analytical technique used in the transmission electron microscope to extract chemical and structural information down to the atomic level. In two previous editions, Electron Energy-Loss Spectroscopy in the Electron Microscope has become the standard reference guide to the instrumentation...