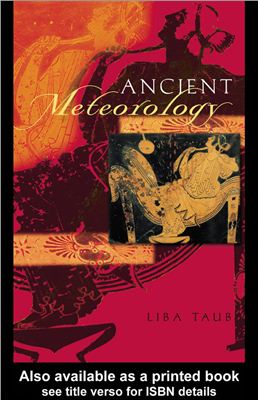 Sciences of Antiquity is a series designed to cover the subject-matter of what we call science. The volumes discuss how the ancients saw, interpreted and handled the natural world, from the elements to the most complex of living things. Their discussions on these matters formed a resource for those who later worked on the same topics, including scientists. The intention of this series is to show what it was in the aims, expectations, problems and circumstances of the ancient writers that formed the nature of what they wrote. A consequent purpose is to provide historians with an understanding of the materials out of which later writers, rather than passively receiving
and transmitting ancient ‘ideas’, constructed their own world-view.
Похожие разделы
Смотрите также

Wiley-VCH, Verlag GmbH, Weinheim, 2006, 479 pp. - ISBN: 3-527-40503-8 Like so many textbooks, this one has its origins in the classroom, the fruit of more than 30 years of combined experience teaching courses on atmospheric radiation to graduate and undergraduate students of meteorology. This experience has forced us to recognize that most of our students do not adequately understand the fundamentals of electromagnetic radiation and its interacti...

Cambridge University Press, 2004.- 248 p. Air-Sea Interaction: Laws and Mechanisms provides a comprehensive account of how the atmosphere and the ocean interact to control the global climate, what physical laws govern this interaction, and what are its prominent mechanisms. In recent years, air-sea interaction has emerged as a subject in its own right, encompassing small- and large-scale processes in both air and sea. A novel feature of the book...

Название: Emanuel K. , Atmospheric Convection Издательство: Oxford University Press Год: 1994 ISBN-10: 0195066308 This graduate-level meteorology text and reference provides a scientifically rigorous description of the many types of convective circulations in the Earth's atmosphere. These range from small-scale, convectively driven turbulences in the boundary layer to precipitating systems covering many thousands of square kilometers. The text...

McGraw-Hill Professional, 2005. - 323 pages. From showers to hurricanes, from heat waves to global warming, weather and climate are important not only to budding meteorologists but also to those in the fields of aviation, earth science, and the environment. In Meteorology Demystified, best-selling author Stan Gibilisco, writing with his usual entertaining and informative style and flair, provides a complete foundation of essential physical and s...

Fourth edition. Elsevier Academic Press, 2004. This revised text presents a cogent explanation of the fundamentals of meteorology, and explains storm dynamics for weather-oriented meteorologists. It discusses climate dynamics and the implications posed for global change. Much of the material is based on a two-term course for seniors majoring in atmospheric sciences.

John Wiley and Sons; Inc., 2003. – 998 pages. One of two major purposes of the Handbook is to provide an up-to-date accounting of the sciences that underlie these important societal issues, so that both citizens and decision makers can understand the scientific foundation critical to the process of making informed decisions. To achieve this goal, we commissioned overview chapters on the eight major topics that comprise the Handbook: Dynamics, Cl...

Zdunkowski W., Bott A. Dynamics of the atmosphere: A course in theoretical meteorology

Cambridg University Press. , 2003, 793 p. Dynamics of the Atmosphere is a textbook with numerous exercises and solutions, written for senior undergraduate and graduate students of meteorology and related sciences. It may also be used as a reference source by professional meteorologists and researchers in atmospheric science. In order to encourage the reader to follow the mathematical developments in detail, the derivations are complete and leave...

Zdunkowski W., Trautmann T., Bott A. Radiation in the atmosphere: A course in Theoretical Meteorology