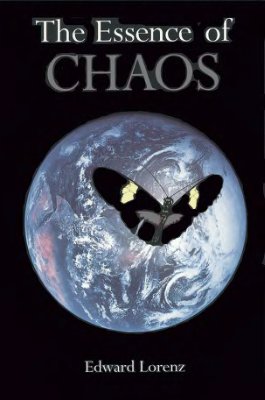 Название: Lorenz E. , The Essence of Chaos.
Издательство: University of Washington.
Год: 1996.
ISBN-10: 0295975148.
The study of chaotic systems has become a major scientific pursuit in recent years, shedding light on the apparently random behaviour observed in fields as diverse as climatology and mechanics. InThe Essence of Chaos Edward Lorenz, one of the founding fathers of Chaos and the originator of its seminal concept of the Butterfly Effect, presents his own landscape of our current understanding of the field.
Lorenz presents everyday examples of chaotic behaviour, such as the toss of a coin, the pinball's path, the fall of a leaf, and explains in elementary mathematical strms how their essentially chaotic nature can be understood. His principal example involved the construction of a model of a board sliding down a ski slope. Through this model Lorenz illustrates chaotic phenomena and the related concepts of bifurcation and strange attractors. He also provides the context in which chaos can be related to the similarly emergent fields of nonlinearity, complexity and fractals.
Смотрите также

New York: Springer, 1996. - 612 pp. На англ. яз. Chaos: An Introduction to Dynamical Systems is a new textbook aimed at introducing the world of nonlinear dynamics and chaos to students in mathematics and the sciences. The authors' goal is to explain the basic concepts in a way that reflects the wide range of influences present during the development of nonlinear dynamics, from mathematics, theoretical science, experimental science, and computer...

Taylor & Francis, 2002. - 580 pages. The field of nonlinear dynamics and low-dimensional chaos has developed rapidly over the past twenty years. The principal advances have been in theoretical aspects but more recent applications in a wide variety of the sciences have been made. Nonlinear Dynamics and Chaos in Semiconductors is the first book to concentrate on specific physical and experimental situations in semiconductors as well as examine...

Chapman and Hall/CRC, 2008, 364 p. Chaotic Modelling and Simulation: Analysis of Chaotic Models, Attractors and Forms presents the main models developed by pioneers of chaos theory, along with new extensions and variations of these models. Using more than 500 graphs and illustrations, the authors show how to design, estimate, and test an array of models. Requiring little prior knowledge of mathematics, the book focuses on classical forms and attr...

Oxford University Press, 2007, 180 pages Chaos exists in systems all around us. Even the simplest system can be subject to chaos, denying us accurate predictions of its behavior, and sometimes giving rise to astonishing structures of large-scale order. Here, Leonard Smith shows that we all have an intuitive understanding of chaotic systems. He uses accessible math and physics to explain Chaos Theory, and points to numerous examples in philosoph...

World Scientific Publishing Company, 2010. - 304 pages. This heavily illustrated book collects in one source most of the mathematically simple systems of differential equations whose solutions are chaotic. It includes the historically important systems of van der Pol, Duffing, Ueda, Lorenz and many others, but it goes on to show that there are many other systems that are simpler and more elegant. Many of these systems have been only recently dis...

Wiley, 2002. - 460 pages. Nonlinear dynamics and chaos involves the study of apparent random happenings within a system or process. The subject has wide applications within mathematics, engineering, physics and other physical sciences. Since the bestselling first edition was published, there has been a lot of new research conducted in the area of nonlinear dynamics and chaos.

Wiley, 2002. - 460 Pages. 2 edition Nonlinear dynamics and chaos involves the study of apparent random happenings within a system or process. The subject has wide applications within mathematics, engineering, physics and other physical sciences. Since the bestselling first edition was published, there has been a lot of new research conducted in the area of nonlinear dynamics and chaos.

InTech, 2011. - 310 pages. This book presents a collection of major developments in chaos systems covering aspects on chaotic behavioral modeling and simulation, control and synchronization of chaos systems, and applications like secure communications. It is a good source to acquire recent knowledge and ideas for future research on chaos systems and to develop experiments applied to real life problems. That way, this book is very interesting for...