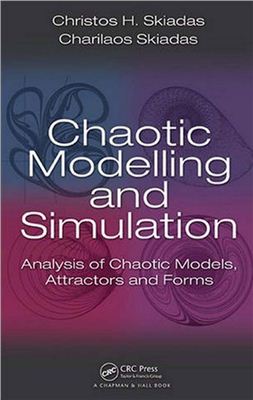 Chapman and Hall/CRC, 2008, 364 p. Chaotic Modelling and Simulation: Analysis of Chaotic Models, Attractors and Forms presents the main models developed by pioneers of chaos theory, along with new extensions and variations of these models. Using more than 500 graphs and illustrations, the authors show how to design, estimate, and test an array of models.
Requiring little prior knowledge of mathematics, the book focuses on classical forms and attractors as well as new simulation methods and techniques. Ideas clearly progress from the most elementary to the most advanced. The authors cover deterministic, stochastic, logistic, Gaussian, delay, H?non, Holmes, Lorenz, R?ssler, and rotation models. They also look at chaotic analysis as a tool to design forms that appear in physical systems; simulate complicated and chaotic orbits and paths in the solar system; explore the H?non–Heiles, Contopoulos, and Hamiltonian systems; and provide a compilation of interesting systems and variations of systems, including the very intriguing Lotka–Volterra system.
Making a complex topic accessible through a visual and geometric style, this book should inspire new developments in the field of chaotic models and encourage more readers to become involved in this rapidly advancing area.
Смотрите также

Chapman & Hall, 1992. - 330 pages. In recent years there has been unprecedented popular interest in the chaotic behavior of discrete dynamical systems. The ease with which a modest microcomputer can produce graphics of extraordinary complexity has fired the interest of mathematical-minded people from pupils in schools to postgraduate students. At undergraduate level, there is a need to give a basic account of the computed complexity within a...

Springer, 2000. - 338 pages. Beginning with ordinary language models or realistic mathematical models of physical or biological phenomena, the author derives tractable mathematical models that are amenable to further mathematical analysis or to elucidating computer simulations. For the most part, derivations are based on perturbation methods. Because of this, the majority of the text is devoted to careful derivations of implicit function theorem...

Название: Lorenz E. , The Essence of Chaos. Издательство: University of Washington. Год: 1996. ISBN-10: 0295975148. The study of chaotic systems has become a major scientific pursuit in recent years, shedding light on the apparently random behaviour observed in fields as diverse as climatology and mechanics. InThe Essence of Chaos Edward Lorenz, one of the founding fathers of Chaos and the originator of its seminal concept of the Butterfly Effect...

Cambridge University Press, 1991. - 377 Pages. Surveying both theoretical and experimental aspects of chaotic behavior, this book presents chaos as a model for many seemingly random processes in nature. Basic notions from the theory of dynamical systems, bifurcation theory and the properties of chaotic solutions are then described and illustrated by examples. A review of numerical methods used both in studies of mathematical models and in the i...

Springer, 2011. - 218 pages. "Fractional-Order Nonlinear Systems: Modeling, Analysis and Simulation" presents a study of fractional-order chaotic systems accompanied by Matlab programs for simulating their state space trajectories, which are shown in the illustrations in the book. Description of the chaotic systems is clearly presented and their analysis and numerical solution are done in an easy-to-follow manner. Simulink models for the selecte...

World Scientific Publishing Company, 2010. - 304 pages. This heavily illustrated book collects in one source most of the mathematically simple systems of differential equations whose solutions are chaotic. It includes the historically important systems of van der Pol, Duffing, Ueda, Lorenz and many others, but it goes on to show that there are many other systems that are simpler and more elegant. Many of these systems have been only recently dis...

InTech, 2011. - 310 pages. This book presents a collection of major developments in chaos systems covering aspects on chaotic behavioral modeling and simulation, control and synchronization of chaos systems, and applications like secure communications. It is a good source to acquire recent knowledge and ideas for future research on chaos systems and to develop experiments applied to real life problems. That way, this book is very interesting for...