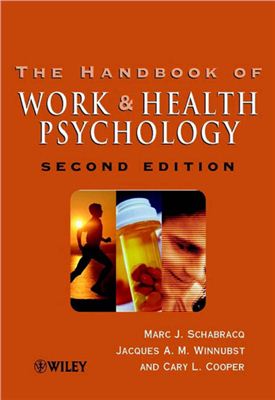 Unhealthy work organizations can create enormous human as well as financial costs. The collective cost of stress to US companies for absenteeism, reduced productivity, compensation claims, health insurance and direct medical expenses has been estimated at $150 billion per year (Murphy & Cooper, 2000). Figures from the Confederation of British Industry (the major employers’ organization in the UK) calculate that millions of working days are lost annually through sickness, at a cost to the economy of Ј11 billion, of which it is estimated that 40% or over Ј4 billion is stress-related.
In addition to the direct costs of sickness absence, labour tuover and the like, there are also indirect costs. The most obvious is presenteeism; that is, the costs to organizations of people tuing up to work who are so distressed by their jobs or some aspect of their organizational environment or climate that they contribute little, if anything, to the product or service they are employed to produce.
The increasing interdependence of work and health has been recognized in almost all industrialized societies. Studs Terkel, the social anthropologist, in his acclaimed book Working, after interviewing hundreds of American workers from shop floor to top floor, concluded that work, is by its very nature, about violence—to the spirit as well as to the body. It is about ulcers as well as accidents, about shouting matches as well as fistfights, about nervous breakdown as well as kicking the dog around. It is above all (or beneath all), about daily humiliations. To survive the day is triumph enough for the walking wounded
amongst the great many of us (Terkel, 1977, p. 1). Theorell and his Swedish colleagues (Alfredsson et al., 1982) have demonstrated in case-controlled studies in Sweden that increased risk of heart attacks was associated with work and occupations characterized by hectic work and low control over the degree of variety and work pace. Cooper and his colleagues in the UK have found in numerous studies (Cooper, 2001) that work stressors are responsible for a myriad of ill health effects of employees at all levels in an organization and in many difficult jobs, organizations and industries.
All of thiswork and much more has led increasingly to the development of a newinterdisciplinary field: work and health psychology. Although these two areas have different origins and have developed out of different traditions, large elements of each now find themselves in this same conceptual and empirical arena. This book is part of that development, an effort to begin to place the foundation stones of this new interdisciplinary field and map the current state of the art and future territory of this important growing discipline.
All of the chapters are written by leading scholars in their field and help to identify not only the problems but also some possible solutions to creating healthier work organizations. It is hoped that senior executives, occupational physicians and human resource managers will take into account some of these ideas in creating move livable work cultures, as Kohauser (1965) said of the American workforce as long ago as 1965:
Mental health is not so much a freedom from specific frustrations as it is an overall balanced relationship to theworld, which permits a person to maintain a realistic, positive belief in himself and his purposeful activities. Insofar as his entire job and life situation facilitate and support such feelings of adequacy, inner security and meaningfulness of his existence, it can be presumed that his mental health will tend to be good. What is important in a negativeway is not any single characteristic of his situation, but everything that deprives the person of purpose and zest, that leaves him with negative feelings about himself, with anxieties, tensions, a sense of lostness, emptiness and futility.
Похожие разделы