Mayr E. What Makes Biology Unique? : Considerations on the Autonomy of a Scientific Discipline 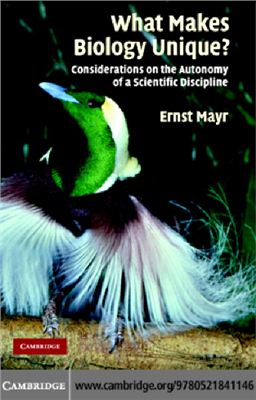 This collection of revised essays argues that biology is an autonomous science rather than a branch of the physical sciences.

Est Mayr, widely considered the most eminent evolutionary biologist of the 20th century, offers insights on the history of evolutionary thought, critiques the conditions of philosophy to the science of biology, and comments on several of the major developments in evolutionary theory. Notably, Mayr explains that Darwin's theory of evolution is actually five separate theories, each with its own history, trajectory and impact.

Est Mayr, commonly referred to as the "Darwin of the 20th century" and listed as one of the top 100 scientists of all-time, is Professor Emeritus at Harvard University.

Benjamin Cummings, 2011. - 544 pages. 12th Edition Explorations in Basic Biology is a self-contained laboratory manual designed for one- or two-semester introductory biology courses for non-biology and mixed biology majors. The exercises are appropriate for three-hour laboratory sessions, but are also adaptable to a two-hour laboratory format. Ideal for students with little hands-on science laboratory experience, this student-friendly text p...

Wiley-VCH, 2005, Pages: 486 Presenting the main concepts, this book leads students as well as advanced researchers from different disciplines to an understanding of current ideas in the complex field of comprehensive experimental investigation of biological objects, analysis of data, development of models, simulation, and hypothesis generation. This book is divided into three parts. The first part gives an introduction to three main foundatio...

Wiley, 2010.(2nd Edition) - An updated edition of the ultimate guide to understanding biology/ Ever wondered how the food you eat becomes the energy your body needs to keep going? The theory of evolution says that humans and chimps descended from a common ancestor, but does it tell us how and why? We humans are insatiably curious creatures who can't help wondering how things work — starting with our own bodies. Wouldn't it be great to have a sing...

Hungry Minds, 2001. - 419 p. - The Advanced Placement Program is designed to encourage students to take challenging courses in high school and receive college credit for their efforts. Many high schools offer classes especially designed for the AP program, but any course or program of study, whatever it is called, is appropriate if the content is college level. This book helps you to prepare for the Advanced Placement Examination in Biology. A ma...

McGraw-Hill, 2011. - 1406 p. - This edition continues the evolution of the new Raven & Johnson’s Biology. The author team is committed to continually improving the text, keeping the student and learning foremost. We have an improved design and updated pedagogical features to complement the new art program and completely revised content of the transformative eighth edition of Biology. This latest edition of the text maintains the clear, access...

BIOLOGY is an authoritative majors textbook with evolution as a unifying theme. In revising the text, McGraw-Hill has consulted extensively with previous users, noted experts and professors in the field. It is distinguished from other texts by its strong emphasis on natural selection and the evolutionary process that explains biodiversity. Not only has the book been thoroughly updated to reflect rapid advances, there is more emphasis today on th...

Schaffner K.F. Discovery and Explanation in Biology and Medicine

University Of Chicago Press, 1993, 617 pages Kenneth F. Schaffner compares the practice of biological and medical research and shows how traditional topics in philosophy of science—such as the nature of theories and of explanation—can illuminate the life sciences. While Schaffner pays some attention to the conceptual questions of evolutionary biology, his chief focus is on the examples that immunology, human genetics, neuroscience, and internal...

Springer Science-i-Business Media, 2006, 632 pages This book brings together three decades worth of collaborative research to address the question "What sustains life?" In part a scientific response to Schr?dinger's work "What is Life?" this text contains elements of memoir, history, and a solid, informative scientific core that will interest the general reader, student, and professional researcher. What Sustains Life? An Overview The Pilgrim...

Wiley, 2006. - 954 pages. The growth of the environmental sciences has greatly expanded the scope of biological disciplines today's engineers have to deal with. Yet, despite its fundamental importance, the full breadth of biology has been given short shrift in most environmental engineering and science courses. Filling this gap in the professional literature, Environmental Biology for Engineers and Scientists introduces students of chemistry, p...