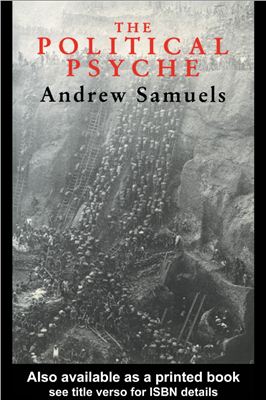 A radical and original study, The Political Psyche joins together depth psychology with politics in a way that fully reflects the discoveries made in analysis and therapy. In an attempt to show that an inner jouey and a desire to fashion something practical out of passionate political convictions are linked projects, author Andrew Samuels brings an acute psychological perspective to political issues such as the distribution of wealth, the market economy, Third World development, environmentalism, and nationalism-expanding and enhancing our conception of "the political". However, keeping true to his aim of creating a two-way dialogue between depth psychology and politics, Samuels also lays bare the hidden politics of the father, the male body, and men's issues in general.

The Political Psyche does not collapse politics and psychology together, nor is Samuels unaware of the troubled relationship of depth psychology to the political events of the century. In the book he presents his acclaimed and cathartic work on Jung, anti-semitism and the Nazis to the wider public.

The text employs a political analysis to shed a fascinating light on clinical work. Samuels conducted a large-scale inteational survey of analysts and psychotherapists conceing what they do when their patients/clients bring overtly political material into the clinical setting. The results, including what the respondents reveal about their own political attitudes, destabilize any preconceived notions about the political sensitivity of analysis and psychotherapy.
Похожие разделы
Смотрите также

Andreas Follesdal, Simon Hix. Why There is a Democratic Deficit in the EU: A Response to Majone and Moravcsik

Статья
JCMS 2006 Volume 44. Number 3. pp. 533–62 Giandomenico Majone and Andrew Moravcsik have argued that the EU does not suffer a ‘democratic deficit’. We disagree about one key element: whether a democratic polity requires contestation for political leadership and over policy. This aspect is an essential element of even the ‘thinnest’ theories of democracy, yet is conspicuously absent in the EU.

Ekdale B., Namkoong K. Why blog? (then and now): exploring the motivations for blogging by popular American political bloggers

Fanon, Franz. The Wretched of the Earth

Grove Press, 1963. - 320 p. Frantz Fanon (1925-1961) was a Martinique-born black psychiatrist and anticolonialist intellectual; The Wretched of the Earth is considered by many to be one of the canonical books on the worldwide black liberation struggles of the 1960s. Within a Marxist framework, using a cutting and nonsentimental writing style, Fanon draws upon his horrific experiences working in Algeria during its war of independence against Fra...

Citizens living in presidential or parliamentary systems face different political choices as do voters casting votes in elections governed by rules of proportional representation or plurality. Political commentators seem to know how such rules influence political behavior. They firmly believe, for example, that candidates running in plurality systems are better known and held more accountable to their constituencies than candidates competing in e...

This comprehensive introduction to the major thinkers and topics in political philosophy explores the philosophical traditions which continue to inform our political judgements. Dudley Knowles introduces the ideas of key political thinkers including Hobbes, Locke, Marx and Mill and influential contemporary thinkers such as Berlin, Rawls and Nozick. He outlines central problems in political philosophy and encourages the reader to critically engage...