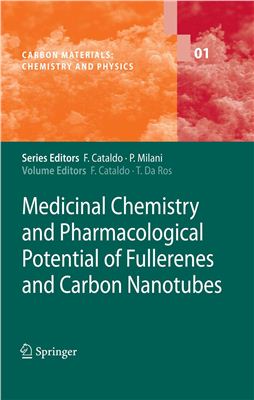 Springer Science + Business Media B.V. , 2008, 411 p.
CARBON MATERIALS: CHEMISTRY AND PHYSICS
A comprehensive book series which encompasses the complete coverage of carbon materials
and carbon-rich molecules from elemental carbon dust in the interstellar medium to the most
specialized industrial applications of elemental carbon and its derivatives. A great emphasis
is placed on the most advanced and promising applications ranging from electronics to
medicinal chemistry. The aim is to offer the reader a book series which not only consists of
self-sufficient reference works, but one which stimulates further research and enthusiasm.

The emerging field of nanotechnology is affirming its increasing importance day by day. In this context fullerenes and carbon nanotubes (CNTs) play an important role. These new allotropic forms of carbon have been discovered in the last two decades, and, since then, they have stimulated the curiosity and interest of physicists and chemists.
This book is the first of a new series entitled Carbon Materials: Chemistry and Physics, the purpose of which is to analyze the new frontiers of carbon.
This volume summarizes the more recent advances on fullerenes and carbon nanotubes facing the biological-medical horizon, an important and interesting area to the scientific community.
We will present general overviews of fullerenes and CNTs that are state-of-the-art in biomedical applications, deepening their principal and more promising exploitations.
In particular for fullerenes, antioxidant properties and photodynamic activity are presented in detail, together with the analysis of gadolinium endohedrals as magnetic resonance imaging (MRI) contrast agents. Moreover, drug delivery based on carbon nanomaterials has been illustrated.
Few chapters are dedicated to toxicity and to the use of nanomaterials as pollutant probes. The debate on fullerene and CNT toxicity is open and reports different results, which are not always able to abolish the conce about pollution related to the industrial production and their impact on the environment. However, it is possible to state that positive evidence for their favorable applications in medicine hasemerged.
Theoretical calculation potentialities have been examined in few chapters, giving new instruments to predict fullerene solubility in different solvents, such as fatty acid esters. Visualization approaches necessary to study unusual compounds such as CNT are herein presented. Despite the structural novelty of CNT, its resemblance to cellular structures is highlighted, launching or confirming the hypothesis of using CNTs as communication devices between cells.
Considering the specificity of the field, this book is mainly addressed to researchers who have delved, or who want to delve, into carbon nanoworld, but atthe same time, it presents a general and accurate view of carbon nanotechnology accessible to researchers intrigued by this topic, but not yet experts in the field.

World Scientific Publishing Co., 2011, 457 pages A hands on reference guide for scientists working in the fields of chemistry, physics, materials science, polymer science, solid-state physics, devices, nanotechnology or supramolecular science of carbon nanomaterials. In-depth and comprehensive coverage of topics combined with the perspectives for future research by the contributing authors. An invaluable reference source essential for both beg...

Wiley, 2007. - 421 p. - This volume combines the chemistry and materials science of nanomaterials and biomolecules with their detection strategies, sensor physics and device engineering. In so doing, it covers the important types of nanomaterials for sensory applications, namely carbon nanotubes, fullerenes, fluorescent and biological molecules, nanorods, nanowires and nanoparticles, dendrimers, and nanostructured silicon. It also illustrates a w...