Comstock G., Scharrer E. The Psychology of Media and Politics 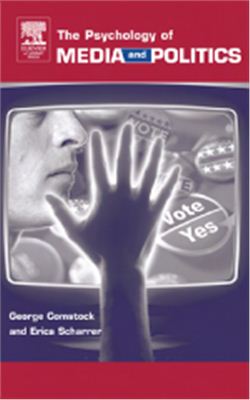 Research indicates that people discount their own opinions and experiences in favor of those of "experts" as espoused in the media. The framing of news coverage thus has a profound impact on public opinion, and political decision making as a response to public outcry. However, the choice of how to frame the news is typically made to solicit viewership and high ratings rather than to convey accurate and meaningful information. This book discusses why people discount their own opinions, how the media shapes the news, when this drives political decision making, and what the effect is on the future of society.

Issues addressed include:
* How powerful are the media in shaping political beliefs/judgment?
* How has this power changed in recent years?
* How does media influence voting behavior?
* To what extent do media opinions affect political decision making?

* Demonstrates the ways in which the media both constrain and facilitate democratic participation
* Provides insight into why individuals have varying levels of attention to and interest in politics
* Discusses such issues as political advertising, polls, debates, and joualists' pursuit of scandal
* Describes why only some Americans tu out to vote in prominent elections.
* Offers a model of personal- versus social-level influences that extends beyond politics into other important topic areas
* Brings together research and theories from the fields of Communication, Psychology, and Political Science
* Reviews hundreds of key sources, both historical and contemporary
Похожие разделы
Смотрите также

Статья
Полис (Политические исследования). - 2006. - № 5. - С. 158 - 170. Harold Lasswell (1902 - 1978) is widely known in the world political science as the founder of political psychology. It was, in particular, thanks to a monograph published in 1930, Psychopathology and Politics, that he acquired that reputation. While acknowledging the book's merits, critics very soon pointed to the bias being observed in it, towards psychoanalytical interpretation...

Image Bite Politics is the first book to systematically assess the visual presentation of presidential candidates in network news coverage of elections and to connect these visual images with shifts in public opinion. Presenting the results of a comprehensive visual analysis of general election news from 1992-2004, encompassing four presidential campaigns, the authors highlight the remarkably potent influence of television images when it comes to...

What shapes political behavior more: the situations in which individuals find themselves, or the internal psychological makeup-beliefs, values, and so on-of those individuals? This is perhaps the leading division within the psychological study of politics today. Political Psychology: Situations, Individuals, and Cases provides a concise, readable, and conceptually-organized introduction to the topic of political psychology by examining this very...

The chapters in this reader were written by leading scholars in the areas of political science and social psychology. The interdisciplinary fusion reflects the vast range of topics and issues at the forefront of each field. Both contemporary and classic articles are compiled, demonstrating the ever-changing nature of political psychology and offering comprehensive coverage of social psychological research into the processes that have governed loc...

Glencoe, Illinois: The Free Press, 1951. 525 pp.Psychopathology and Politics- Politics, Who Gets What, When, How. Democratic Character. В данный сборник работ вошли следующие работы Гарольда Лассуэлла: Психопатология и политики; Политика: кто получает, что, когда, как; Демократический характер. The Free Press has reprinted in one volume two of Lasswell's books, Psychopathology and Politics, first published in 1930, and Politics: Who Gets What,...

A radical and original study, The Political Psyche joins together depth psychology with politics in a way that fully reflects the discoveries made in analysis and therapy. In an attempt to show that an inner journey and a desire to fashion something practical out of passionate political convictions are linked projects, author Andrew Samuels brings an acute psychological perspective to political issues such as the distribution of wealth, the marke...