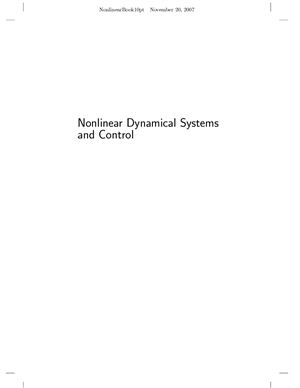 Nonlinear Dynamical Systems and Control presents and develops an extensive treatment of stability analysis and control design of nonlinear dynamical systems, with an emphasis on Lyapunov-based methods. Dynamical system theory lies at the heart of mathematical sciences and engineering. The application of dynamical systems has crossed interdisciplinary boundaries from chemistry to biochemistry to chemical kinetics, from medicine to biology to population genetics, from economics to sociology to psychology, and from physics to mechanics to engineering. The increasingly complex nature of engineering systems requiring feedback control to obtain a desired system behavior also gives rise to dynamical systems.

World Scientific Publishing Company, 2004. - 408 pages. This book is an introduction to the application of nonlinear dynamics to problems of stability, chaos and turbulence arising in continuous media and their connection to dynamical systems. With an emphasis on the understanding of basic concepts, it should be of interest to nearly any science-oriented undergraduate and potentially to anyone who wants to learn about recent advances in the fiel...

Springer, 2011. - 218 pages. "Fractional-Order Nonlinear Systems: Modeling, Analysis and Simulation" presents a study of fractional-order chaotic systems accompanied by Matlab programs for simulating their state space trajectories, which are shown in the illustrations in the book. Description of the chaotic systems is clearly presented and their analysis and numerical solution are done in an easy-to-follow manner. Simulink models for the selecte...

Springer, 1991. - 178 Pages. Limit cycles or, more general, periodic solutions of nonlinear dynamical systems occur in many different fields of application. Although, there is extensive literature on periodic solutions, in particular on existence theorems, the connection to physical and technical applications needs to be improved. The bifurcation behavior of periodic solutions by means of parameter variations plays an important role in transitio...

Springer, 1999. - 704 pages. There has been a great deal of excitement over the last few years concerning the emergence of new mathematical techniques for the analysis and control of nonlinear systems: witness the emergence of a set of simplified tools for the analysis of bifurcations, chaos and other complicated dynamical behaviour and the development of a comprehensive theory of nonlinear control. Coupled with this set of analytic advances has...

Springer-Verlag Berlin, 2010, 298 pages Linear, Time-varying Approximations to Nonlinear Dynamical Systems introduces a new technique for analysing and controlling nonlinear systems. This method is general and requires only very mild conditions on the system nonlinearities, setting it apart from other techniques such as those – well-known – based on differential geometry. The authors cover many aspects of nonlinear systems including stability t...

Springer, 2003. - 808 pages. This volume is intended for advanced undergraduate or first-year graduate students as an introduction to applied nonlinear dynamics and chaos. The author has placed emphasis on teaching the techniques and ideas that will enable students to take specific dynamical systems and obtain some quantitative information about the behavior of these systems. He has included the basic core material that is necessary for higher l...