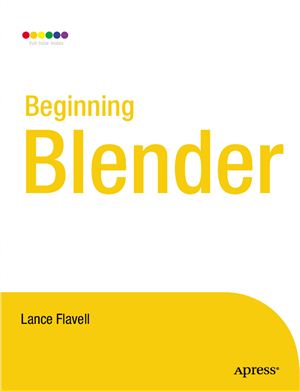 A new world of creative possibilities is opened by Blender, the most popular and powerful open source 3D and animation tool. Blender is not just free software; it is also an important professional tool used in animated shorts, television commercials and shows, as well as in production for films like Spiderman
2. Lance Flavell’s Beginning Blender will give you the skills to start shaping new new worlds and virtual characters, and perhaps lead you down a new professional path.
Beginning Blender covers the latest Blender 2.5 release in depth. The book starts with with the creation of simple figures using basic modeling and sculpting. It then teaches how to bridge from modeling to animation, and from scene setup to texture creation and rendering, lighting, rigging and ultimately, full animation. You will create and mix your own movie scenes, and you will even lea the basics of games logic and how to deal with games physics.
Похожие разделы
Смотрите также

Wadsworth Publishing, 2006. - 243 pages. GRAPHIC DESIGN BASICS combines design principles, history, and current technology to present students a comprehensive introduction to the field of graphic design. Keeping pace with rapid changes in the field of design, while maintaining a consistently high academic quality, the text emphasizes design structure and visual perception with a wide range of visuals from throughout design history, as well as t...

2004. - 272 Pages Business Cards: The Art of Saying Hello is the ultimate business card book, bringing together the best examples of cards created by designers around the world. Business cards are a major design challenge; creating successful cards is all about the clever use of space; but just a little space. And that’s not all. A design needs to make a splash, stand out from the crowd or announce you as part of a team; and how do you solve the...

Following on from the best-selling A Century of Design, this innovative new title by design expert Jeremy Aynsley offers a comprehensive, stylish guide to the most significant themes and genres in graphic design during the 20th century, from the innovative posters of Will Bradley and Henry van de Velde to the digital graphics of Neville Brody and Sheila Levrant de Bretteville. Organized chronologically, this unique overview examines the work of...

Создание Дизайн логотипа, примеры компоновки на конвертах, визитках и печатной продукции. This fourth collection of the world`s best letterhead and logo design showcases the most elemental-and popular-areas of graphic design today. Each featured letterhead and logo design was selected for its greativty and effectiveness: the volume as a whole presents a wealth of ideas for designers and clients. Designs for letterheads, business cards, envelopes...

010 publishers, 1997. - 56 pages. Visual Function is a lively overview of the emerging field of information design and its impact on the world around us. Paul Mijksenaar, professor at Delft University of Technology, provides an opinionated survey of a variety of disciplines including graphic design, mapmaking, industrial design, and architecture, in this plea for clarity and good sense in the design of the products we encounter in everyday life....

This book is simply the most compact and lucid handbook available outlining the basic principles of layout, typography, color usage, and space. Being a creative designer is often about coming up with unique design solutions. Unfortunately, when the basic rules of design are ignored in an effort to be distinctive, design becomes useless. In language, a departure from the rules is only appreciated as great literature if recognition of the rules un...

Sullivan, Jenny. Graphic Design America 3: Portfolios from the Best and Brightest Design Firms from Across the U.S

Peachpit Press, 2004. - 192 pages. So you have a great concept and all the fancy digital tools you could possibly require — what's stopping you from creating beautiful pages? Namely the training to pull all of these elements together into a cohesive design that effectively communicates your message. Not to worry: This book is the one place you can turn to find quick, non-intimidating, excellent design help. In The Non-Designer's Design Book, 2n...

Peachpit Press, 2008. - 216 Pages. A lot has happened in the world of digital design since the first edition of this title was published, but one thing remains true: There is an ever-growing number of people attempting to design pages with no formal training. This book is the one place they can turn to find quick, non-intimidating, excellent design help from trusted design instructor Robin Williams. This revised classic–now in full color–includ...