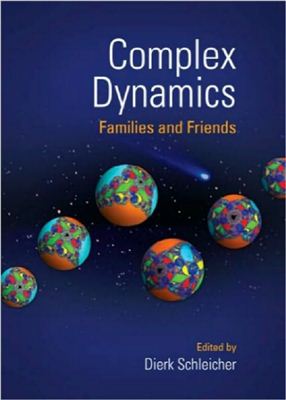 Complex Dynamics: Families and Friends features contributions by many of the leading mathematicians in the field, such as Mikhail Lyubich, John Milnor, Mitsuhiro Shishikura, and William Thurston. Some of the chapters, including an introduction by Thurston to the general subject of complex dynamics, are classic manuscripts that were never published before but have influenced the field for more than two decades. Other chapters contain fresh, original work and bring readers to the current frontier of research.
The title reflects the fruitful interplay between diverse mathematical fields bound together by the common theme of complex dynamics, including hyperbolic geometry, number theory, group theory, combinatorics, general dynamics, and many more. At the same time, the title alludes to the spirit of mathematical friendship among the researchers in this area. This book is a tribute to John Hubbard, one of the most inspiring pioneers in the field of complex dynamics.
Похожие разделы
Смотрите также

Springer, 2007, 304 pages This text gives a detailed account of various techniques that are used in the study of dynamics of continuous systems, near as well as far from equilibrium. The analytic methods covered include diagrammatic perturbation theory, various forms of the renormalization group and self-consistent mode coupling. Dynamic critical phenomena near a second order phase transition, phase ordering dynamics, dynamics of surface growth...

Springer, 2010. - 325 pages. Discover a wide range of findings in quantitative complex system science that help us make sense of our complex world. Written at an introductory level, the book provides an accessible entry into this fascinating and vitally important subject.

Taylor & Francis, 2002. - 376 pages. Nonlinear dynamics has been successful in explaining complicated phenomena in well-defined low-dimensional systems. Now it is time to focus on real-life problems that are high-dimensional or ill-defined, for example, due to delay, spatial extent, stochasticity, or the limited nature of available data. How can one understand the dynamics of such systems? Written by international experts, Nonlinear Dynamics...

John Wiley & Sons, 1999. - 267 pages. The study of nonlinear dynamics is one of the most active fields in modern science. It reaches across the whole range of scientific study, and is applied in fields as diverse as physics, engineering, biology, economics and medicine. However, the mathematical language used to describe nonlinear dynamics, and the proliferation of new terminology, can make the use of nonlinear dynamics a daunting task to th...

World Scientific Publishing Company, 2004. - 408 pages. This book is an introduction to the application of nonlinear dynamics to problems of stability, chaos and turbulence arising in continuous media and their connection to dynamical systems. With an emphasis on the understanding of basic concepts, it should be of interest to nearly any science-oriented undergraduate and potentially to anyone who wants to learn about recent advances in the fiel...

Wiley-VCH, 2009. - 258 pages. Adopting a cross–disciplinary approach, the review character of this monograph sets it apart from specialized journals. The editor is advised by a first–class board of international scientists, such that the carefully selected and invited contributions represent the latest and most relevant findings. The resulting review uses a common language and enables both researchers and newcomers in both natural and social sci...

Wiley, 2002. - 460 pages. Nonlinear dynamics and chaos involves the study of apparent random happenings within a system or process. The subject has wide applications within mathematics, engineering, physics and other physical sciences. Since the bestselling first edition was published, there has been a lot of new research conducted in the area of nonlinear dynamics and chaos.