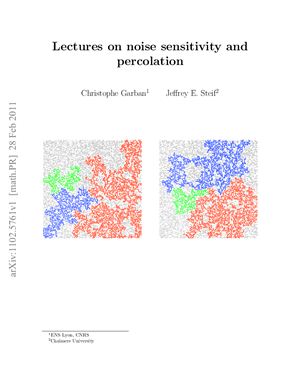 The goal of this set of lectures is to combine two seemingly unrelated topics:

- The study of Boolean functions, a field particularly active in computer science;
- Some models in statistical physics, mostly percolation.

The link between these two fields can be loosely explained as follows: a percolation configuration is built out of a collection of i.i.d "bits" which determines whether the corresponding edges, sites, or blocks are present or absent. In that respect, any event conceing percolation can be seen as a Boolean function whose input are precisely these "bits".

Springer-Verlag Berlin, 2006, 318 pages This classic text, an often-requested reprint, develops and explains the foundations of noise-induced processes. At its core is a self-contained, textbook-style presentation of the elements of probability theory, of the theory of Markovian diffusion processes and of the theory of stochastic differential equations, on which the modeling of fluctuating natural and artificial environments is based. Following...

Korsch H.J., Jodl H.-J. Chaos: a program collection for the PC; with many numerical experiments

Springer-verlag, 2008. 352 р. ISBN 978-3-540-63893-3 (2nd ed. ) This new edition strives yet again to provide readers with a working knowledge of chaos theory and dynamical systems through parallel introductory explanations in the book and interaction with carefully-selected programs supplied on the accompanying diskette. The programs enable readers, especially advanced-undergraduate students in physics, engineering, and math, to tackle relevant...

World Scientific Publishing, 1992, 454 pages. This book is based on a graduate course for scientists and engineers. The author's style is clear, formulations of mathematical results are precise. The book helps the reader to create a good global picture of the theory of dynamical systems. The author has gathered a considerable number of facts about dynamical systems in this book, including almost 1000 references, so that it can also serve as a ha...

European Mathematical Society, 2010. - 363 pages. This book originated from an introductory lecture course on dynamical systems given by the author for advanced students in mathematics and physics at ETH Zurich. The first part centers around unstable and chaotic phenomena caused by the occurrence of homoclinic points. The existence of homoclinic points complicates the orbit structure considerably and gives rise to invariant hyperbolic sets nearb...