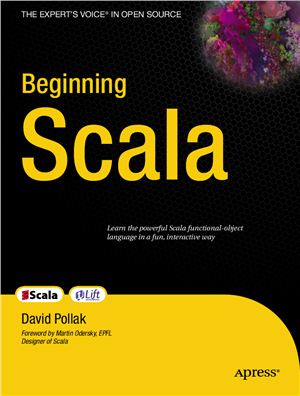 Written by Lift Scala web framework founder and lead Dave Pollak, Beginning Scala takes a down–to–earth approach to teaching Scala that leads you through simple examples that can be combined to build complex, scalable systems and applications.

This book introduces you to the Scala programming language and then guides you through Scala constructs and libraries that allow small and large teams to assemble small components into high–performance, scalable systems. You will lea why Scala is becoming the language of choice for Web 2.0 companies such as Twitter as well as enterprises such as Seimens and SAP.
Похожие разделы
Смотрите также

Paperback: 200 pages. Publisher: Apress; 1 edition (May 15, 2009). Language: English. ISBN-10: 1430224215. ISBN-13: 978-1430224211. The Definitive Guide to Lift will educate you about Lift, a great framework for building compelling web applications. Lift is designed to make powerful techniques easily accessible, while keeping the overall framework simple and flexible. Lift makes it fun to develop because it lets you focus on the interesting parts...

Michael Fogus, Chris Houser. The Joy of Clojure: Thinking the Clojure. Manning Publications, 2011. - 360 p. - ISBN: 1935182641 Clojure is a dynamic programming language that targets the Java Virtual Machine. The Joy of Clojure goes beyond the syntax, and shows how to write fluent, idiomatic Clojure code. Readers will learn to approach programming challenges from a Functional perspective and master the Lisp techniques that make Clojure so elegant...