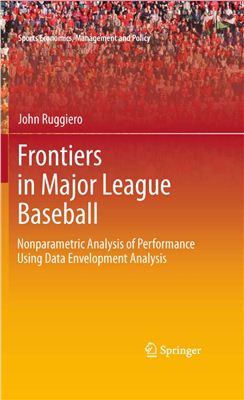 Publisher: Springer | 2010 | ISBN10: 1441908307 | 156 pages
This book focuses on the application of Data Envelopment Analysis (DEA) to Major League Baseball (MLB). DEA is a nonparametric linear programming model that is used across academic disciplines. In sports economics, authors have applied the technique primarily to assess team and/or managerial efficiency. The basis for performance analysis is economic production theory, where it is assumed that baseball can be viewed as a production process whereby inputs (player quality measures) are transformed into outputs (wins, attendance). The primary advantage that DEA has over more traditional regression based approaches is the ability to handle multiple inputs and multiple outputs. Further, the approach is nonparametric and hence, does not require a priori specification of the production function. The book develops the theory of DEA in the context of a production environment. A focal point is the assessment of technical and cost efficiency of MLB teams. It is shown that previous frontier applications that measure efficiency provide biased results given that the outcome of a game is zero-sum. If a team loses a game due to inefficiency, another team wins a lost game. A corrected frontier is presented to overcome this problem. Free agent salary arbitration is analyzed using a dual DEA model. Each free agent's contract zone is identified. The upper and lower bounds, representing the player's and team's perspective of value, respectively, are estimated. Player performance is estimated using a modified DEA model to rank order players based on multiple attributes. This model will be used to evaluate current Hall of Fame players. We provide arguments for other players who are deserving of membership. We also use our measure of performance and evaluate age-performance profilers for many ball players. Regression analysis is used to identify the age of peak performance. The method is used to evaluate some of the all-time greats. We also use the method to analyze admitted and implicated steroid users. The results clearly show that performance was enhanced. This book will provide appropriate theoretical models with methodological considerations and interesting empirical analyses and is intended to serve academics and practitioners interested in applying DEA to baseball as well as other sports or production processes.
Смотрите также

Publisher: Springer – 2006, 350 pages ISBN: 0387242651 An Introduction to Efficiency and Productivity Analysis is designed to be a general introduction for those who wish to study efficiency and productivity analysis. The book provides an accessible, well-written introduction to the four principal methods involved: econometric estimation of average response models; index numbers, data envelopment analysis (DEA); and stochastic frontier analysis...

Springer | 2006 | ISBN: 0387452818 | 490 pages | Data Envelopment Analysis: A Comprehensive Text with Models, Applications, References, And DEA-Solver Software, 2nd Edition is designed to provide a systematic introduction to DEA and its uses as a multifaceted tool for evaluating problems in a variety of contexts. Each chapter accompanies its developments with simple numerical examples and discussions of actual applications. Emphasis is placed on...

Cambridge University Press – 1994, 312 pages ISBN: 0521420334 This book presents a mathematical programming approach to the analysis of production frontiers and efficiency measurement. The authors construct a variety of production frontiers, and by measuring distances to them are able to develop a model of efficient producer behavior and a taxonomy of possible types of departure from efficiency in various environments. Linear programming is used...

Wiley, 2011. - 167 pages Introducing Data Envelopment Analysis (DEA) - a quantitative approach to assess the performance of hedge funds, funds of hedge funds, and commmodity trading advisors. Steep yourself in this approach with this important new book by Greg Gregoriou and Joe Zhu. "This book steps beyond the traditional trade-off between single variables for risk and return in the determination of investment portfolios. For the first time, a c...

Cambridge University Press – 2006, 262 pages ISBN: 0521851440 With the healthcare sector accounting for a sizeable proportion of national expenditures, the pursuit of efficiency has become a central objective of policymakers within most health systems. However, the analysis and measurement of efficiency is a complex undertaking, not least due to the multiple objectives of health care organizations and the many gaps in information systems. In res...

Springer | 2009 | ISBN: 0387895515 | 294 pages "Mathematical Optimization and Economic Analysis" is a self-contained introduction to various optimization techniques used in economic modeling and analysis such as geometric, linear, and convex programming and data envelopment analysis. Through a systematic approach, this book demonstrates the usefulness of these mathematical tools in quantitative and qualitative economic analysis. The book present...

SAGE | 2003 | ISBN: 076199761X, 0761997601 | 202 pages | 'This book is an excellent tool for practitioners who are interested in the merits and pitfalls of the technique. (The author's) research is an example of inventiveness, diligence and accuracy' - Freerk A. Lootsma, Delft Institute of Technology Data envelopment Analysis is a Mathematical Programme for measuring performance efficiency of organizational units. The organizational units, termed...

Cambridge University Press | ISBN: 0521802563 | 2004 | 366 pages This book describes the method of data envelopment analysis that uses mathematical programming techniques to obtain measures of efficiency of individual forms from their observed input and output quantities. The method permits setting up realistic input-output targets for the firm's managers. A firm is considered to be technically inefficient when it fails to yield the maximum quan...

Springer 2007 | ISBN 978-0-387-71606-0 | 334 pages In a relatively short period of time, Data Envelopment Analysis (DEA) has grown into a powerful quantitative, analytical tool for measuring and evaluating performance. It has been successfully applied to a whole variety of problems in many different contexts worldwide. The analysis of an array of these problems has been resistant to other methodological approaches because of the multiple levels o...