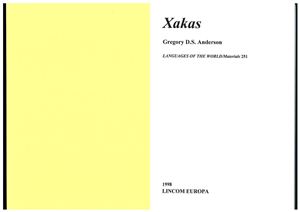 Xakas is a Turkic language spoken by 70,000 people in south central Siberia. Xakas is a cover term created in the early 20th century to cover the related dialect clusters of the region; the term is positively viewed by some members of the ethnolinguistic group and negatively by others. Xakas is one of the only Turkic language to preserve nine short vowels.
Похожие разделы