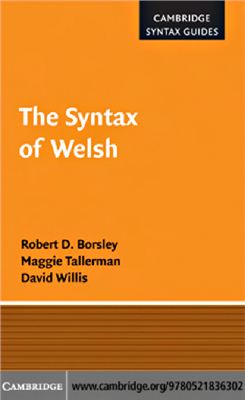 Welsh, like the other Celtic languages, is best-known amongst linguists for its verb-initial word order and its use of initial consonant mutations. However it has many more characteristics which are of interest to syntacticians. This is a concise and accessible overview of the major syntactic phenomena of Welsh. A broad variety of topics are covered, including finite and infinitival clauses, noun phrases, agreement and tense, word order, clause structure, dialect variation, and the language's historical Celtic background. Drawing on work carried out in both Principles and Parameters theory and Head-driven Phrase Structure Grammar, it takes contemporary colloquial Welsh as its starting point and draws contrasts with a range of literary and dialectal forms of the language, as well as earlier forms (Middle Welsh) were appropriate. An engaging guide to all that is interesting about Welsh syntax, this book will be welcomed by syntactic theorists, typologists, historical linguists and Celticists alike.
Похожие разделы
Смотрите также

Ball M.J. Mutation in Welsh. - Routledge, 1992. - 336p. The Initial Consonant Mutation system of Welsh is unique to Indo-European languages and has been the subject of much theoretical research. The multi-faceted nature of the phenomenon demands multi-dimensional treatment and this uniquely comprehensive book provides an integrated overview of this important feature from a wide linguistic viewpoint. In Welsh, Initial Consonant Mutation has impli...

Borsley R.D. , Morris Jones B. Welsh Negation and Grammatical Theory. - University of Wales Press, 2005. - 352 p. Offering insight into a neglected area of Welsh studies, this book focuses on the ways negation works in colloquial Welsh and briefly touches upon the literary Welsh language, illustrating the numerous ways a negative sentence is formed and explaining the conventions that native speakers must follow when using negative patterns.

Davies J. The Welsh Language (University of Wales - Pocket Guide). - University of Wales Press, 2005. - 135 p. Janet Davies offers a broad historical survey, looking at Welsh-language culture from sixth-century heroic poetry to television and pop music in the late twentieth century. She considers the public status of the language from the Act of Union with England of 1536 to the enactment of the Welsh Language Act in 1993, compares the status of...

Dery R. Business Welsh: A User's Manual. - Routledge, 1995. - 108 p. Business Welsh is a reference volume for native speakers and second language learners who wish to use Welsh in a business or professional environment.

King G. Modern Welsh: A Comprehensive Grammar. - Routledge, 2003. - 392 p. This new expanded edition of Modern Welsh is the ideal reference source for all speakers and learners of Welsh, suitable for use in schools, colleges, universities and adult classes at all levels. Focusing on contemporary spoken Welsh, this new enlarged edition features a substantial new function-based section, explaining and exemplifying a wide range of sentence and phra...

King G. The Pocket Modern Welsh Dictionary: A Guide to the Living Language

Словарь
Oxford University Press, 2000. - 562 p. This dictionary is intended for the growing number of learners of modern Welsh in all walks of life, and is designed with their needs in mind. It represents a departure from traditional dictionaries which, particularly for Welsh, have confined themselves to more or less word-for-word entries without explanation. A notable feature of the present dictionary is the provision in the Welsh-English side of num...

Словарь
Lewis H. Collins Spurrell Welsh Dictionary. - William Collins Sons Co Ltd, 1991. - 384 p. This dictionary has been expanded and updated to provide increased contemporary coverage of Welsh and English. This bi-lingual, pocket-sized book offers vocabulary and usage relevant to both the school and the general user and, as such, should appeal to both. It is the result of collaboration between the staff of the Department of Welsh Language and Literat...

Rhys Jones T.J. Teach Yourself Welsh. - NTC publishing Group, 1992. - 334 p. Introduction The aim of this book is to teach you to understand and speak Welsh as it is spoken in Wales today. It is designed as an introduction to the language for complete beginners, as an aid to those who are already learning Welsh, and as a source of revision for those who wish to refresh their previous (perhaps almost forgotten! ) knowledge. It will also provide W...

Rhys Jones T.J. Teach Yourself Welsh. - NTC publishing Group, 1992. - 334 p. (Аудиоприложение к учебнику) Introduction The aim of this book is to teach you to understand and speak Welsh as it is spoken in Wales today. It is designed as an introduction to the language for complete beginners, as an aid to those who are already learning Welsh, and as a source of revision for those who wish to refresh their previous (perhaps almost forgotten! ) kno...