Can Seo. A BBC Television course for beginners in Gaelic 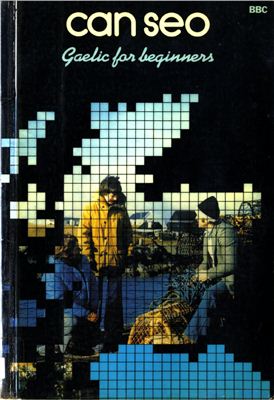 This book accompanies a series of twenty television programmes.
The book and the programmes are designed for absolute beginners in Scottish Gaelic. The emphasis is on the spoken language and the course enables the viewer to conduct simple everyday conversations in Gaelic.
The book is indispensable to the understanding of the television broadcasts. It contains selected texts from the programmes, in addition to vocabulary, grammar notes and graded exercises. The exercises amplify the lessons and give structured revision of vocabulary and grammar.
Two LP records or tape cassettes accompany the Can Seo series. These contain aids to pronunciation and exercises which give valuable practice in speech and comprehension.
The series has been conceived as an integrated course, employing television, printed text and recorded speech, but the book can be used independently.

Ciamar a tha thu?
A bheil thu ag iarraidh cofaidh?
Anns a' bh?th
Oidhche mhath leat
Air a' bh?ta
Am bi thu a' tighinn an seo tric?
D? an uair a tha e?
An do chuir thu a-mach an cat?
Fuirich mionaid
Bliadhna Mhath Ur
Am faod mi smocadh?
Ceart ma tha
Fad na h-oidhche
Can a-rithist e
Can a-rithist e-a-rithist
'Se amadan a tha annad !
Nach ann ann a tha an latha math?
Co's fhe?rr leat cofaidh na ti?
A' bruidhinn ri ch?ile
Mar sin leibh
Guide to pronunciation
Summary of grammar
Key to exercises
Na faclan (General glossary)
Leabhraichean (Bibliography)
'Can Seo' means 'say this' and throughout the series we will encourage you to speak Gaelic at every opportunity,
'Can Seo' is for adult beginners in Scottish Gaelic. The course is designed to give you a basic Gaelic vocabulary and an idea of some of the elementary structures of the language, so that you can conduct a simple conversation in Gaelic. The emphasis is on the spoken word so it is important that you find people to talk to. either socially or in classes.
The course has three inter dependent parts. There are twenty television programmes, a book and two LP discs (or cassettes). The television programmes serve as an introduction both to the Gaelic language and the social and cultural strands which distinguish the Gaelic speaker in the context of Scotland and the United Kingdom. The book revises the language and vocabulary of the programmes and contains exercises in speech. comprehension and the grammar of the language The discs (or cassettes) complement the exercises in the book and serve as guides to pronunciation. However, if you have not seen the television programmes, you can still lea Gaelic from the book, together with the discs/cassettes.

The book
Each chapter begins with extracts from the serial story, so that you can revise the language immediately after the programme. In the 'Can Seo' section, the grammatical structures are revised. Can Seo' is an elementary course. We will deal with general rules of grammar only, exceptions to rules will be indicated only if they occur in the series. Where there are synonymous phrases or expressions, we will in the main, use one alteative consistently.

Obair
This section of the book lays stress on the oral side of the language and should be used in conjunction with the disc/ cassette which contains complementary exercises as a prompt to speech, if possible find someone who will work with you to give you practice in speaking Gaelic. All the vocabulary in the series is contained in a glossary at the back of the book, together with a key to the exercises.

Using the course
Try to see the programme before going on to the book and disc/cassette. Spend as much time as possible on the sounds of the language. Try to find a Gaelic speaker to talk to.

Dialects
Throughout the Gaelic speaking area there are a variety of dialects, as there are in English. We have chosen Skye dialect for the teaching element of the course, although the other dialects will be heard on television and in the serial on the discs/cassettes.
Похожие разделы
Смотрите также

Can Seo. A BBC Television course for beginners in Gaelic

(Автор неизвестен) Can Seo. A BBC Television course for beginners in Gaelic. - BBC, 1979. - 128 p. Аудиоприложение. Учебник: This book accompanies a series of twenty television programmes. The book and the programmes are designed for absolute beginners in Scottish Gaelic. The emphasis is on the spoken language and the course enables the viewer to conduct simple everyday conversations in Gaelic. The book is indispensable to the understanding...

Macneill M. Everyday Gaelic. - Birlinn Ltd. , 2006. - 136 p. Since English is also spoken in the Gaelic-speaking areas, communication in Gaelic is not so much a matter of necessity as of choice and interest. This book, therefore, covers more than just the phrases needed by an outsider in a foreign land - it also dips into the chatty, the personal and domestic aspects of the language. It ranges from simple words and phrases to the more complex an...

Словарь
Owen R.C. The Modern Gaelic-English Dictionary. - Gairm Publications, 1993. - 139 p. This up-to-date Gaelic dictionary contains full grammatical information and pronunciation for each word. It is designed for use together with Thomson's "New English-Gaelic Dictionary". This dictionary appears at a very opportune moment. Not only is the Gaelic language at this time as progressive as any other modern European language but interest in this beautif...

Издатель: Trafalgar Square Год издания: 1993 Количество страниц: 344 Язык: English This is a course in spoken and written Gaelic designed for someone who has never learnt the language before or who wants to brush up rusty skills. It is a practical modern course based on the Council of Europe`s guidelines on language learning. The course covers the topic areas and language functions outlined by the Scottish Examination Board in the new Standard G...

Watson A. The Essential English-Gaelic Dictionary

Словарь
Watson A. The Essential English-Gaelic Dictionary. - Birlinn, 2005. - 422 p. This new dictionary is intended for learners of Gaelic — from beginners to university and college students. It gives generous coverage of the core of the language, but the inclusion of vocabulary from fields such as business and IT means that it will also be a valuable tool for all who require an up-to-date reference work. It contains a large amount of explanatory mate...