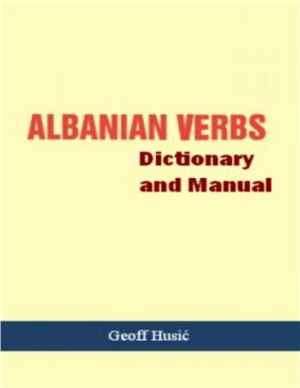 The goal of this work is to serve as a tool for students of standard Albanian, based on the Tosk
dialect, providing a ready-reference source to the complete conjugation in all tenses and moods of
many of the most common verbs in their standard forms. This work was prompted by frustration
caused by trying to construct the complete conjugations of Albanian verbs according to the available Albanian grammars and dictionaries [see Bibliography]. Many grammars present elaborate
classification schemes for Albanian verbs according to conjugation type, which is very helpful for
understanding the dynamics of the changes in verb stems and endings. However, Mann and ?amaj both base these pattes primarily on Geg forms, while making references to the Tosk (the current standard). This, of course, becomes confusing for anyone attempting to use these grammars to lea what is now considered the standard.
Furthermore, in these two grammars, as well as in Newmark (which does use standard forms)
verb pattes and their associated tenses and moods are spread over many pages, with notes on exceptional forms not always conspicuous. ?amaj's extensive notes on Old Albanian and Arber?sht forms make it difficult to locate standard forms at a glance. Eintrei is somewhat better in respect to ease of usage, however it exists only in Russian. With no exaggeration, it occasionally requires thumbing through all four grammars and several dictionaries to arrive at the complete conjugation of some verbs, and even at that point there are often lingering doubts spawned by certain conflicting information, due to heretofore unsettled issues in standardization, even in sources going by the standard. It is my hope that this manual will be a useful tool in mastering the Albanian verb.
Похожие разделы
Смотрите также

Год: 2008 Количество страниц: 331 Colloquial Albanian gives a complete introduction to a fascinating and little-known language, together with background information on the Albanian people and their culture. No previous knowledge of the language is necessary, and the course can be used for the classroom or self-study. Each lesson contains conversations and texts based on everyday situations, with vocabulary built up gradually from this material....

Publisher: Peace Corps, Washington, D.C. Date: 1992 Pages: 273 Target language: Albanian Source languages: English This document is provided as-is. The quality is not fantastic, but it is readable. This guide is designed for Albanian language training of Peace Corps workers in Albania, is intended to be used in a competency-based language training program, and reflects daily communication needs in that context. It consists of an introductory se...

Colloquial Albanian gives a complete introduction to a fascination and little-known language, together with background information on the Albanian people and their culture. No previous knowledge of the language is necessary, and the course can be used for the classroom or for self-study. Each lesson contains conversations and texts based on everyday situations, with vocabulary built up gradually from this material. All the grammar used in the les...

Publisher: Stanford University Press Publication date: 1982 ISBN: 10: 0804711291 Number of pages: 336 This book is intended as a reference grammar for English-speaking students who are learning present-day Albanian. It is not a linguist\'s grammar, not a scientific study of the language for the purpose of advancing our theoretical understanding of language, nor a scholar\'s grammatical compendium for the purpose of interpreting documents from th...

This work addresses the historical development of the Albanian language from prehistoric times to the 21st century. The main focus of the book is the reconstruction of Proto-Albanian, the analysis of its relations to its ancestor, Indo-European, and its further change leading to Albanian in its present form. The volume contains a detailed description of historical phonetics and morphology of Albanian. The reader will also find important data on t...

Sht?pia botuese e librit shkollor, 1975. - 223 p. (качество скана не очень высокое) This method can serve as a basis for learning the Albanian language in schools with teachers. It has three parts, with the main grammar rules necessary for the Albanian language in the initial stage. In the first part, grammar info is provided free of theoretical definitions, in a practical way, through linguistic structures, illustrated texts, conversations an...