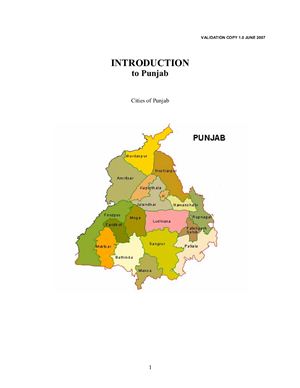 Punjab represents Indian culture dating back to 7000 B.C, when one of the earliest human civilizations, known as the Indus Valley Civilization was known to have existed in the Punjab region. Over the centuries Punjab has seen invasions by numerous foreigners including the Persians, Alexander the Great, a few prominent Chinese tribes, the Mughals and finally the British. With each invasion and subsequent change of rulers Punjab absorbed a lot of the culture and traditions of the invaders, eventually creating the wonderful amalgamation of present day Punjab. Besides being one of the leading grain producers in the country, Punjab also has significant hosiery, textile, and thermal power related industries
Похожие разделы
Смотрите также

software
Kosh is an English-to-Punjabi and Punjabi-to-English dictionary. It allows keyboard entry and dictionary use in both languages. There are a number of learning games and lessons for students who want to learn more. In addition to using the native Windows XP and Vista keyboard layouts it allows for a number of other font entry methods and conversions. Punjabi (or Panjabi) is spoken by 100 Million people world wide. (Англо-панджабский и панджабско-...

This book is the first one in the 'Punjabi Made easy' series. It is meant primarily for beginners of Punjabi. It may be of use to more advanced learners and teachers of students whose first or dominant language is English. It is also the first book in the series designed for those students preparing for the G.C.S.E. examination in Punjabi.

Ldn. -Chicago: "McGraw-Hill", 1999. — vii+294 р. (аудио к курсу Teach Yorself Punjabi ISBN: 9780844201856 This is a complete course in spoken and written Panjabi. If you have never learned Panjabi before, or if your Panjabi needs brushing up, Teach Yourself Panjabi is for you. The authors have created a practical course that is both fun and easy to work through. They explain everything along the way and give you plenty of opportunities to p...

Tolstaya N.I. Languages of Asia and Africa: The Panjabi Language

Routledge Kegan & Paul, 1982. - 92 p. Panjabi (or Punjabi) is spoken by about 35 million people in the Panjab region of Pakistan, and is the vehicle for recording the teachings of the gurus of the Sikh religion. In the last thirty years its use for official documents, education and literature has grown considerably. This is the second volume in the Languages of Asia and Africa series. The book was originally published in a very limited ed...