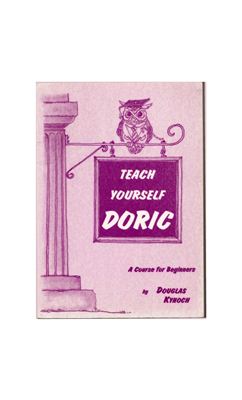 This Doric primer appears at a time when the considerable threat to the North-east tongue seems to be matched by a determination that it should not be allowed to die without a struggle. The language used here is, generally speaking, the lively, if somewhat diluted, form of Doric spoken in the city of Aberdeen, though account has been taken too of the rich veacular of the rural hinterland; and there's much here that the whole North-east coer should find familiar.

Other than stimulating interest in the Doric, the main aim of the book is to entertain. There is a long tradition of the use of Doric for comic purposes; and, if the language is in need of a tonic at the present time, laughter may be an appropriate medicine. At the same time, the grammar is genuine (or is intended to be) and may provide a useful basis for anyone bold enough to lea Doric. Where language-teaching has been sacrificed to levity, may the serious student forgive.

With great temerity (and perhaps foolhardiness), I have abandoned the standard form of Scots spelling in favour of a style which emphasises Doric's uniqueness among Scottish dialects, as well as highlighting its idiosyncratic pronunciation. It is to be hoped that any initial resistance to the changes on the part of the Doric-speaking reader will quickly disappear and that any inconsistencies of spelling will be forgiven. The appearance of some words seemed too familiar to change.

Students may wish, on completing the course of study, to retu to this foreword and translate it into Doric. On the other hand, they may not.
Смотрите также

Hoshino Tatsuo, Marcus Russell. Lao for beginners - An introduction to the spoken and written language of Laos

Tuttle Language Library 1995 Lao for Beginners is designed for either self-study or classroom use. It teaches all four language skills - speaking, listening (when used in conjunction with the audio), reading and writing ; and offers clear, easy, step-by-step instruction building on what has been previously learned. There is an audio version that follows the book. Three casettes or three CDs are available separately.

ISBN 978-1-257-37287-4 Copyright Public Domain Published April 1, 2011 Language English Pages 219 Базовый учебник искуственного языка Ложбан. * Lojban is designed to be used by people in communication with each other, and possibly in the future with computers. * Lojban is designed to be culturally neutral. * Lojban has an unambiguous grammar, which is based on the principles of logic. * Lojban has phonetic spelling, and unambiguous resolution of...