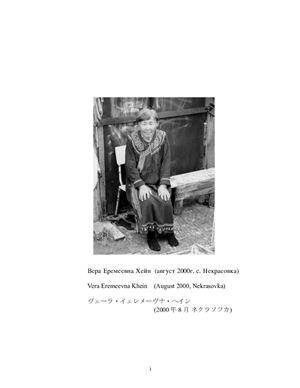 Издатель: Frisian Academy
Год: 2004
Количество страниц: 1+1+3+3+2+32+1+73+20+19+2
Битрейт аудио: 192 kbps
Информатор/Рассказчик: В.Ф. Акиляк-Иванова. Записи сказок на нивхском языке с переводом и коментариями. Sound Materials of the Nivkh Language
3. Hidetoshi Shiraishi and Galina Lok with preface by Tjeerd de Graaf
We published the third volume of the series Sound Materials of the Nivkh Language in dec
.2004. This volume contains several fragments of conversation between Vera Eremeevna Khejn (Nivkh name Pygsk) and several other speakers of the Amur dialect. In this volume, Baba Vera tells us about the Nivkh people who lived on the West-coast of North Sakhalin, how they lived and about various traditions of Nivkh.
This is the third volume of the series Sound Materials of the Nivkh Language. The content of this volume deviates from the previous two volumes (Shiraishi and Lok 2002, 2003) in that it consists solely of recordings of conversations. The authors recorded these conversations on two different occasions in different places. The first session How the Nivkh lived in old days was recorded in the living room of Mrs. V. Khejn痴 house in Nekrasovka in 2000. The second session I came to Sakhalin when I was young was recorded in the city of Okha in 2001. The participants differ a bit in the two sessions but one speaker, Mrs. V. Khejn was always present. The title of the current volume Pygsk is her Nivkh name. Mrs. Khejn was bo on the island of Bajdukov nearby the mouth of the river Amur (see map) in 1929. Her parents, father Ezdanok and mother Ezguk, were both from the village of Langrvo, which lies on Bajdukov. When Mrs. Khejn was five years old the family moved to Sakhalin. On Sakhalin they lived in villages as Romanovka and Kryuvo. When Mrs. Khejn has grown up she moved to the village of Tengi and began to work for the fishery-kolkhoz P誕tiletka (Five-Year Plan). There, she married with Pjotr Khejn. After some time, she visited her birthplace Bajdukov for the first time in forty years. She was introduced to her relatives, uncles and aunts.
Mrs. Khejn lived in the village of Romanovka for a long time, where her interest and enthusiasm for traditional handicrafts of Nivkh grew. She joined several mission of arts and crafts to Moscow as a representative of Sakhalin. For her contribution to the traditional Nivkh handicrafts Mrs. Khejn was given honorable mention several times.
In recent years Mrs. Khejn helped many researchers and provided them with necessary information about the traditional lifestyle and culture of Nivkh. Those researchers were not restricted from Russia but from various institutions around the world, including Canada, France, Japan, the Netherlands and the U.S.A. Currently, Mrs. Khejn lives in the village of Nekrasovka, North Sakhalin.