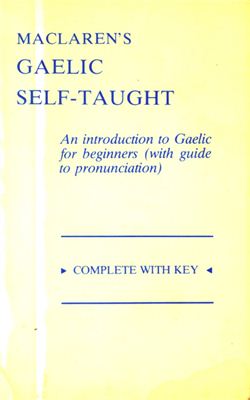 ".It was my original intention merely to correct and revise Mr. James White MacLean's " Introduction to Gaelic," but as the revision progressed I found that I was practically re-writing the whole work so that the portion of it I was leaving intact had also to be re-written, regraded and arranged to suit the revised matter. The volume I present to the student is therefore an entirely new work.
I have endeavoured to keep the phonetic sounds as simple as possible ; some of the finer ones may have been omitted, but these may be left to be acquired as the student progresses. I have considered it inadvisable to follow the pronunciation of any one district. Varying dialects will be found in Sutherland, Inveess, Lewis, Skye, Mull and Islay, and I have endeavoured to find a standard between them. On the whole a very fair idea of the pronunciation is given and the work of the teacher is thus in the case of leaers of the language very much simplified. The various lessons and exercises are judiciously and effectively graded and the difficulties which invariably meet leaers of Gaelic rendered easy by simple, helpful explanations and illustrations of the peculiarities of Gaelic idiom as compared with English, which should go far to make the study of the language not a little attractive.
A teacher who can speak the language should not confine himself to the lessons alone. He should introduce familiar objects by simple short questions and answers suggested by or containing some words in the lessons. Such phrases may be written on the blackboard to be copied by the pupils into their books. But to teach the pupil to speak should be the main object, as a living language is synonymous with a spoken language. Pronounce every word of Gaelic in the vocabularies, exercises, etc., and make the pupils in tu read out the Gaelic sentences. At the same time I have tried to make the lessons throughout as clear and as simple as possible, remembering that a large number of my readers will have no teacher. Beginners should be cautious of using some Gaelic words in any way outside their use as they occur in the lessons."
James Maclaren.
Похожие разделы
Смотрите также

Издательство: Steve Savage Publishers Limited Год: 2006 Количество страниц: 319 Гэльские глаголы - систематизированные и упрощенные (гэльский/шотландский язык). To hold any kind of conversation in Scottish Gaelic, you need a firm grasp of the Gaelic verb. Sentences tend to start with a verb, and even to answer a simple 'yes' or 'no' in Gaelic requires the confident and correct use of verbs. Not only does this book explain the formation and func...

Mackinnon, R. Teach Yourself Gaelic. - Hodder and Stoughton, 1975. - 324 p. (Нет страниц 102-103) This book provides a modern and lively introduction to Scottish Gaelic, a language that holds the key to a very important part of Scotland's cultural heritage. The lessons are carefully graded, and each step is accompanied by exercises and a comprehensive scheme of pronunciation. The course is suitable for use not only by the private student but a...

Macneill M. Everyday Gaelic. - Birlinn Ltd. , 2006. - 136 p. Since English is also spoken in the Gaelic-speaking areas, communication in Gaelic is not so much a matter of necessity as of choice and interest. This book, therefore, covers more than just the phrases needed by an outsider in a foreign land - it also dips into the chatty, the personal and domestic aspects of the language. It ranges from simple words and phrases to the more complex an...

Издательство: Edinburgh's Telford College Год выпуска: 1995 Количество страниц: 119 ISBN: 1900674009, 9781900674003 Формат: PDF Язык курса: Английский Введение в гэльский (шотландский) язык. A great many people have felt, at one time or another, that they would like to learn to speak Scottish Gaelic. Far fewer people, however, seem to get round to doing anything about it, and that is a great pity. Often finding the time can be a problem, or perh...

Издательство: Teach Yourself Год выпуска: 2008 Количество страниц: 44 ISBN: 978-0340968772 Аудио кодек: MP3 Битрейт аудио: 224 kbps Формат: PDF Самоучитель гэльского (шотландского) языка с аудиокурсом. This stand-alone, all-audio course can be used by those who have little or no knowledge of the language, by those who want to learn or brush up basic conversation skills, and by more advanced learners who require extra audio material to compleme...