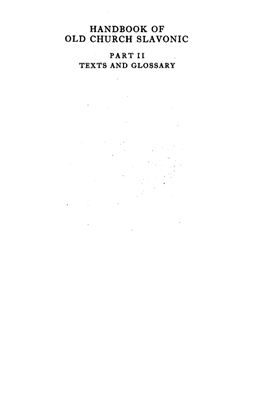 Preface
This Grammar is intended to help students of Slavonic philology to interpret Old Slavonic texts and to provide a starting-point for studying the history of the Slavonic languages. An attempt has therefore been made to present the facts, particularly of the phonetic system, from a descriptive and historical point of view and to draw attention to those regular correspondences between phonemes of cognate languages which seem to indicate constant principles operating in linguistic changes. It does not claim to be a historical grammar of Old Church Slavonic: its aim is to give the student in Slavonic philology a clear picture of the system of the first Slavonic literary language. As Common Slavonic is not recorded and Slavonic linguistic unity lasted until the sixth to seventh century a. d. , Old Church Slavonic supplements our knowledge of Proto-Slavonic and so is an introduction to comparative Slavonic philology.
The method and plan of the Grammar conform to its purpose and aim. As it has been assumed that students will use the Grammar to read and interpret texts, the number of examples has been limited; but an attempt has been made to indicate to the student that Old Church Slavonic represents only one recorded moment of a section of a spoken language continuously changing in time and space. Fluctuations in so-called linguistic rules have been noted in order to draw the attention of students to the fluidity of linguistic phenomena and to possibilities for further research. Dialectal features and opinions based on hypotheses have also been indicated. All examples have been verified in the texts of the available editions.
Unlike phonetics and morphology, syntax has not been treated in a special chapter. As morphology and syntax are in practice interdependent, and as Old Church Slavonic syntax is based on that of the original Greek texts, its study seemed too complex to be included in this Grammar. But its characteristic features appear in the chapters devoted to conjunctions and prepositions as well as in the examples illustrating the various parts of speech.
The author is very conscious of his great debt to his predecessors, among whom he would especially name P. Diels, A. Vaillant, and N. van Wijk. As the manuscript was sent for printing in September 1954, he has not been able to make use of studies published since.
The author wishes to express his gratitude and thanks to Professor B. O. Unbegaun, Professor of Comparative Slavonic Philology in the University of Oxford, to Dr. R. Auty, Lecturer in Slavonic Studies in the University of Cambridge, and to Mr. E. D. Tappe, Lecturer in Rumanian in the School of Slavonic and East European Studies of the University of London, for reading the manuscript and suggesting improvements; to Miss S. C. Gardiner for compiling the subject-index and helping with the Cyrillic word-index; and to the Athlone Press for ensuring that the Grammar was produced under the best technical conditions.
If the Grammar succeeds in guiding the student in the field of Slavonic philology, as a branch of Indo-European linguistics, it will have achieved its purpose.
G. N.
Похожие разделы
Смотрите также

Gamanovich A. Grammar of the Old Slavonic Language

Gamanovich A. Grammar of the Old Slavonic Language. - Jordanville: Holy Trinity Monastery, 2001. - 438p. Church Slavonic, as the name itself indicates, is a language meant for a special purpose. The word "Church" shows its use in church services, and the term "Slavonic" points to the fact that it is employed by Slavic peoples, for the most part the Russians, Serbs and Bulgarians.

Pages: 282 Publisher: Mouton de Gruyter, Seventh Revised Edition (2001) Quality: good: pdf This description of the structure of Old Church Slavonic is intended to present fully the important data about the language, without citing all the minutiae of attested variant spellings. The facts have been treated from the point of view of structural linguistics, but pedagogical clarity has taken precedence over the conciseness required for elegant forma...