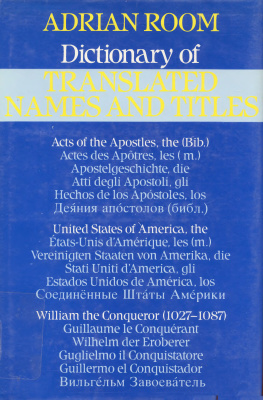 Boston: Routledge Kegan & Paul, 1986 — 460 p. — ISBN10: 0-71009953-3 — ISBN13: 978-0710099532 (Словарь переведённых имен и названий на английском, французском, немецком, итальянском, испанском и русском языках) INTRODUCTION The aim of this present dictionary is to supply not only the traditional or agreed translations of over 4000 English names and titles into five different foreign languages (French, German, Italian, Spanish, Russian, as being the most common European languages traditionally encountered by English speakers), but also translations from each of these five languages into English. (The latter is done by means of a separate cross-index section at the end of the book; see page 295.) Perhaps the really original contribution of the work is its large number of translated titles (as distinct from mere geographical or personal names). Here will be found a wide selection of the titles of literary works (novels, plays, poems, and so on) as well as of films and works of art (paintings, sculptures, architectural monuments and the like). The literary works themselves range, via the books of the Bible and other religious writings, from the classics of Greek and Roman writers to mode fiction, and the ‘artistic’ titles embrace not only films and the fine and applied arts but musical works (operas, ballets, symphonies, for example) and more miscellaneous creations such as the Bayeux Tapestry (really a name, more than a title) and Cleopatra’s Needle (more a nickname). For ease of reference, all true titles in the dictionary are printed in italics, with the exception of the Russian titles which, as is customary in that language, are given in quotes. The names in the dictionary cover not only geographical and personal names (places and people) but also historical events (wars, battles, pacts, revolutions) and inteational organisations such as the United Nations and the World Health Fund. Personal names cover not only well-known historical characters, including those known by nicknames (Eric the Red, Charles Martel), but also biblical personages, mythological characters, saints, popes, fictional characters (Man Friday) and semimythical persons such as Robin Hood and King Arthur. There are also a good representation of astronomical names, whether or not based on the characters of classical mythology, as many of them are. The entries are arranged under their English alphabetical order, with the English (GB) name or title followed by its equivalents in French (F), German (D), Italian (I), Spanish (E), and Russian (SU), these abbreviations being, for convenience, those of the respective countries’ Inteational Vehicle Registrations. All titles are printed in italics except for the Russian, which are in quotes. This means that all the other entries not in italics are regarded as
names. Books of the Bible, however, are not italicised as titles.
Похожие разделы