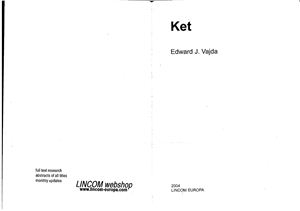 Ket is the only surviving member of the formerly widespread Yeniseic family and one of the world's more intriguing language isolates. Its phonology, vocabulary, and grammar differ strikingly from the surrounding families. A system of five phonemic tones, apparently derived from simplified consonant articulations, mark the beginning of each phonological word. Agreement?related inflections reflect a tripartite noun?class division based on animacy and gender. The polysynthetic verb contains ten position classes and involves a variety of distinct agreement pattes: active/inactive, ergative/absolutive, nominative/accusative, and two that employ redundant subject markers. Each stem selects one of these strategies as part of its lexical makeup. The co-indexed subject and object NPs are zero-marked regardless of the verb's agreement type. Incorporation affects certain intransitive subjects, as well as objects, instruments, and directional adverbs. Important derivational categories include event number (punctual vs. iterative) and transitivity, with transitive and intransitive stems normally differing in some formal way. Causatives, inceptives, and even infinitives are distinct lexemes rather than grammatical forms of another stem. The only verbal inflectional categories are tense (past/non-past), mood (indicative /imperative), and agreement in person, class, and number with at most two grammatical terms. Particles convey other temporal and modal nuances. Most morphemes are roots or grammatical inflections. With so few derivational affixes, compounding is the most prevalent technique of lexeme creation. Redundant inflections also play a role in stem formation. This is manifested most obviously in the verb, but occurs in the noun too. Despite its isolate status, Ket shares certain areal features with its Uralic, Turkic, and Tungusic neighbors. These include a nominal paradigm containing a dozen cases and a propensity to use postpositions or case suffixes as clausal subordinators. Ket is spoken today by a few hundred of the 1,200 Ket people, mainly in remote areas near the Yenisei River in the Turukhansk District of Russia's Krasnoyarsk Province. Most speakers are adults who know Russian fluently too. This book contains the first full-length description of Ket to appear in English. It covers all aspects of the phonology, morphology and syntax of Southe Ket (the dialect with the most speakers), and briefly discusses the traditional culture and its characteristic vocabulary. Also included is a previously unpublished folktale with interlinear morpheme glosses and an English translation.
Похожие разделы