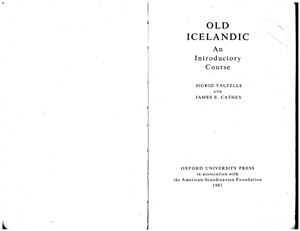 Словарь
An Icelandic-English dictionary is based on the MS. collections of the late Richard Cleasby. Enlarged and completed by G. Vigfusson. With an introduction and life of Richard Cleasby by G. Webbe Desent.

Faarlund J.T. The Syntax of Old Norse: With a survey of the inflectional morphology and a complete bibliography

Oxford University Press, 2004. - 318 p. This book offers the first account of Old Norse syntax for almost a hundred years and the first ever in a non-Scandinavian language. The language of the Vikings and of the Old Icelandic sagas is the best documented medieval Germanic language and the author is able to present a comprehensive analysis of its syntax and overviews of its phonology and morphology. He supports his analyses with examples taken fr...