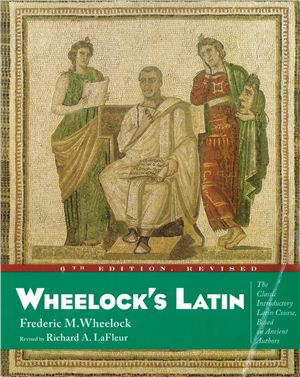 The classic, single–volume introductory Latin textbook, introduced in 1956 and still the bestselling and most highly regarded textbook of its kind.

Wheelock's Latin, sixth edition, revised, has all the features that have made it the best–selling single–volume beginning Latin textbook, many of them revised and expanded:

Self–tutorial exercises with an answer key for independent study

Also includes maps of the Mediterranean, Italy and the Aegean area, as well as numerous photographs illustrating aspects of classical culture, mythology, and historical and literary figures presented in the chapter readings.

Wheelock's Latin is the top–selling Latin reference in the US.

Interest and enrolments in Latin have been steadily rising in the U.S. for the past 20 years. One–half million people are currently enrolled in Latin classes, and at least 10,000 teachers, professors and graduate assistants are teaching the language in America.
Смотрите также

Janson T. A Natural History of Latin. - Oxford University Press, 2004. - 316 p. Latin is alive and well. Beginning in Rome around 600 BC Latin became the language of the civilized world and remained so for over two millennia. French, Spanish, Italian, and Romanian are among its progeny and it still provides the international vocabulary of law and life science. No known language, including English - itself enriched by Latin words and phrases - ha...