Beard H. X-Treme Latin: All the Latin You Need to Know for Survival in the 21st Century 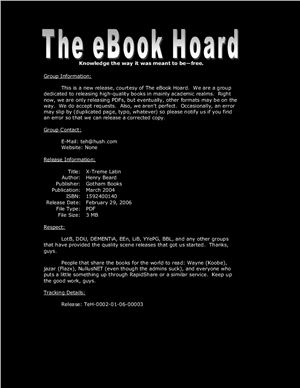 The master of American wit—whose books have sold more than four million copies combined—delivers a hilarious handbook of Latin phrases for saying what's really on your mind, without any consequences.

In staff meetings and singles bars, on freeways and fairways, there are aggravating people lurking everywhere these days. But bestselling humorist Henry Beard has the perfect comeback for all prickly situations, offering a slew of quips your nemesis won't soon forget. . . or even understand.

Beard's gift is his ability to make fun of popular culture and the current zeitgeist. In X-Treme Latin he provides Latin with an attitude, an indispensable phrasebook that taps the secret power of Latin to deliver, in total safety, hundreds of impeccable put-downs, comebacks, and wisecracks. Within its pages you will lea how to insult or fire coworkers; blame corporate scandals on someone else; cheer at a World Wrestling Entertainment match; talk back to your computer, TV, or Game Boy; deal with your road rage; evade threatening situations; snowboard in style; talk like Tony Soprano; and much more.

Janson T. A Natural History of Latin. - Oxford University Press, 2004. - 316 p. Latin is alive and well. Beginning in Rome around 600 BC Latin became the language of the civilized world and remained so for over two millennia. French, Spanish, Italian, and Romanian are among its progeny and it still provides the international vocabulary of law and life science. No known language, including English - itself enriched by Latin words and phrases - ha...