Comrie B. The Languages of the Soviet Union 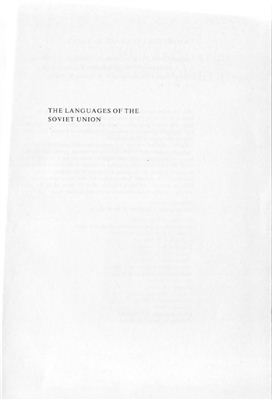 A general account of the languages of the Soviet Union, one of the most diverse multinational and multilingual states in the world as well as one of the most important. There are some 130 languages spoken in the USSR, belonging to five main families and ranging from Russian, which is the first language of about 130,000,000 people, to Aluet, spoken only by 96 (in the 1970 census). Dr Comrie has two general aims. First, he presents the most important structural features of these languages, their genetic relationships and classification and their distinctive typological features. Secondly, he examines the social and political background to the use of functioning of the various languages in a multilingual state. The volume will be of importance and interest to linguists and to those with a broader professional interest in the Soviet Union.
Похожие разделы
Смотрите также

Cambridge Language Surveys Pages: 715 Publisher: Cambridge University Press (2010) Quality: good: pdf What are the unique characteristics of sign languages that make them so fascinating? What have recent researchers discovered about them, and what do these findings tell us about human language more generally? This thematic and geographic overview examines more than forty sign languages from around the world. It begins by investigating how sign l...

Pages: 446 Publisher: Unesco 1990 Quality: good: pdf This work is a study of Arctic languages written in an interdisciplinary manner. Part of the Unesco Arctic project aimed at safeguarding the linguistic heritage of Arctic peoples, the book is the outcome of three Unesco meetings at which conceptual approaches to and practical plans for the study of Arctic cultures and languages were worked out. Languages covered are: (1) those of the Soviet No...

Comrie B. Aspect. An Introduction to the Study of Verbal Aspect and Related Problems

Comrie B. Aspect. An Introduction to the Study of Verbal Aspect and Related Problems. Cambridge: Cambridge University Press, 1976. - 142p. The aim of the present book is to provide an introduction to verbal aspect and related concepts. It differs from most other books on aspect in that it is not concerned with any one particular language, nor with a comparison of various individual languages, but rather presents aspect as a part of general lingu...

Cambridge University Press-1985 -The overall scope of this work is to provide an account of tense from the viewpoint of language universals and linguistic typology, that is, to establish the range of variation that is found across languages in tense, and what the limits are to that variation. In chapter I, first some preliminary remarks are given concerning the notion tense and its relation to time , in particular defining tense as the grammatica...

Routledge, 2009. - 928 p. How many languages are there in the world? What language do they speak in India? What languages have the most speakers? What languages were spoken in Australia, or in Mexico before European immigration? When did Latin slop being spoken, and when did French start being spoken? How did English become such an important world language? These and other similar questions are often asked by the interested layman. One aim of thi...

Cambridge Language Surveys Pages: 778 Publisher: Cambridge University Press (2004) Quality: good: pdf Aboriginal people have been in Australia for at least 40,000 years, speaking about 250 languages. Through examination of published and unpublished materials on each of the individual languages, Professor Dixon surveys the ways in which the languages vary typologically and presents a profile of this long-established linguistic area. The areal dis...

Holm John. An Introduction to Pidgins and Creoles

Cambridge Textbooks in Linguistics Pages: 306 Publisher: Cambridge University Press (2004) Quality: good: pdf This textbook is a clear and concise introduction to the study of how new languages come into being. Starting with an overview of the field's basic concepts, it surveys the new languages that developed as a result of the European expansion to the Americas, Africa, Asia and the Pacific. Long misunderstood as "bad" versions of European lan...

Advances in Sociolinguistics Pages: 251 Publisher: Continuum (2009) Quality: good: pdf The Languages of Urban Africa consists of a series of case studies that address four main themes The first is the history of African urban languages. The second set focus on theoretical issues in the study of African urban languages, exploring the outcomes of intense multilingualism and also the ways in which urban dwellers form their speech communities. The v...

Ural-altaische Bibliothek Pages: 221 Publisher: Otto Harrassowitz (1965) Quality: good: scanned book This text is designed as a manual for university students to provide general information on Altaic linguistics, as well as bibliographical information otherwise difficult to obtain in American universities. In part 1, the author classifies the Altaic languages-Mongolian, Manchu-tungus, Chuvash-turkic, (with the possible inclusion of Korean)-and p...

Publisher: Edinburgh University Press. Number Of Pages: 320. Publication Date: 2001. Format / Quality: pdf. Language contact is everywhere: many nations have more than one official language, and quite possibly most people in the world speak two or more languages. What happens to different peoples and to their languages when they come into contact? In this survey of the social, political and linguistic consequences of language contact, Sarah G. Th...