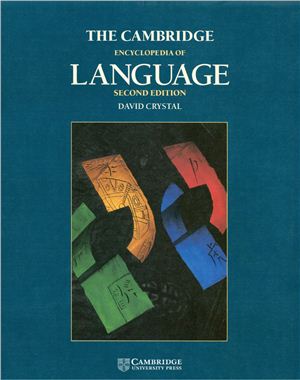 Publisher: Cambridge University Press.
Date : 1997.
Pages : 119
В данном файле 119 отсканированных страниц. В книге всего 488 страниц.
Format : PDF.
This Second Edition of The Cambridge Encyclopedia of Language presents a mass of new information and introduces the subject of language to a fresh generation of students and general readers. Probably the most successful general study of language ever published, The Cambridge Encyclopedia of Language covers all the major themes of language study, including popular ideas about language, language and identity, the structure of language, speaking and listening, writing, reading, and signing, language acquisition, the neurological basis of language, and languages of the world.
Exposing this work to a new generation of readers, the Second Edition extends the range of coverage to include advances in areas such as machine translation, speech interaction with machines, and language teaching. There is new material on acoustics, physiological concepts of language, and World English, and a complete update of the language distribution maps, language-speaking statistics, table of the world's languages, and further reading. All geopolitical material has been revised to take account of boundary changes. The book has been redesigned and is presented for the first time in full color, with new pictures and maps added.
Похожие разделы
Смотрите также

Cambridge Language Surveys Pages: 715 Publisher: Cambridge University Press (2010) Quality: good: pdf What are the unique characteristics of sign languages that make them so fascinating? What have recent researchers discovered about them, and what do these findings tell us about human language more generally? This thematic and geographic overview examines more than forty sign languages from around the world. It begins by investigating how sign l...

Pages: 209 Publisher: Cambridge University Press (2003) Quality: good: pdf The rapid endangerment and death of many minority languages across the world is a matter of widespread concern, not only among linguists and anthropologists but among all concerned with issues of cultural identity in an increasingly globalized culture. A leading commentator and popular writer on language issues, David Crystal asks the fundamental question, ‘Why is languag...

Cambridge Language Surveys Pages: 778 Publisher: Cambridge University Press (2004) Quality: good: pdf Aboriginal people have been in Australia for at least 40,000 years, speaking about 250 languages. Through examination of published and unpublished materials on each of the individual languages, Professor Dixon surveys the ways in which the languages vary typologically and presents a profile of this long-established linguistic area. The areal dis...

Pages: 265 Publisher: Cambridge University Press (2006) Quality: good: pdf What is ethnicity? Is there a 'white' way of speaking? Why do people sometimes borrow features of another ethnic group's language? Why do we sometimes hear an accent that isn't there? This lively overview reveals the fascinating relationship between language ethnic identity, exploring the crucial role it plays in both revealing a speaker's ethnicity and helping to constru...

Studies in the Social and Cultural Foundations of Language Pages: 323 Publisher: Cambridge University Press (2006) Quality: good: pdf Language, our primary tool of thought and perception, is at the heart of who we are as individuals. Languages are constantly changing, sometimes into entirely new varieties of speech, leading to subtle differences in how we present ourselves to others. This revealing account brings together eleven leading speciali...

Pages: 505 Publisher: Cambridge University Press (2004) Quality: good: pdf This is a comprehensive and wide-ranging guide to language and society in South Africa. The book surveys the most important language groupings in the region in terms of pre-colonial and colonial history; contact between the different language varieties (leading to language loss, pidginization, creolization and new mixed varieties). It examines language and public policy i...

Shibatani Masayoshi. The Languages of Japan

Cambridge Language Surveys Pages: 411 Publisher: Cambridge University Press (1990) Quality: good: scanned book This book surveys the two main indigenous languages of Japan, Japanese and Ainu. No genetic relationship has been established between them, and structurally they differ significantly. Shibatani has therefore divided his study into two independent parts. The first is the most comprehensive study of the polysynthetic Ainu language yet to...

Cambridge University Press, 2009, 320 pages, File type: PDF, Size: 1,4 mb Language policy is all about choices. If you are bilingual or plurilingual, you have to choose which language to use. Even if you speak only one language, you have choices of dialects and styles. Some of these choices are the result of management, reflecting conscious and explicit efforts by language managers to control the choices. This is the first book to present a speci...

Cambridge Language Surveys Pages: 223 Publisher: Cambridge University Press (First published 1983 Re-issued in this digitally printed version 2007) Quality: good: pdf At least a hundred indigenous Indian languages are known to have been spoken in Mesoamerica, but it is only in the past fifty years that many of them have been adequately described. Professor Su?rez draws together this considerable mass of scholarship in a general survey that will...

Энциклопедия
Elsevier, 2010. - 632 pages. This volume descibes, in up-to-date terminology and authoritative interpretation, the field of neurolinguistics, the science concerned with the neural mechanisms underlying the comprehension, production and abstract knowledge of spoken, signed or written language. An edited anthology of 165 articles from the award-winning Encyclopedia of Language and Linguistics 2nd edition, Encyclopedia of Neuroscience 4th Edition a...