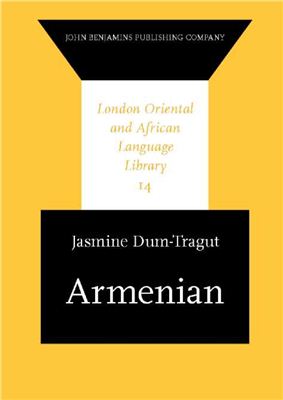 
The present volume sets out to describe the grammatical structure of Mode Easte Armenian, the official language of Armenia, a state which only attained independence from the Soviet Union in 1991. Armenia is situated in the Anatolian highlands between Turkey in the west, Syria and Iran in the south and south-east, and the Caucasus in the north. Communities speaking varieties of Easte Armenian are also found in Abkhazia, southe Georgia and Azerbaijan, as well as throughout the Armenian diaspora. Those communities who live in Turkey speak a somewhat different variety, known as Weste Armenian.
The author, Jasmine Dum-Tragut, is Universit?ts-Dozentin in Linguistics and Armenian Studies at the University of Salzburg in Austria and holds an honorary doctorate from the Armenian Academy. Her analysis combines the findings of traditional Armenian grammars with methods and insights drawn from more recent theoretical linguistics, in particular language typology. It is based on an extensive corpus of spoken and written material, a rich selection of Armenian sentences being presented both in the Armenian script and in Romanised transcription, all fully glossed and translated.
Похожие разделы
Смотрите также

Реферат
The Armenian language is an independent member of the Indo-European language that belongs to the western branch of the European-Aryan family and traces its roots back to the time of Armeno-Phrygians, Hayes, and Urartians. There is also kinships with the ancient Hittites, Mitanni, Hurrian, and some Old Persian. Modern linguists claim that the Armenian language has retained its nationality from ancient times to the present, and that it possesses gr...

Washington, D.C.: 1958. 422 p. Written for students of East Armenian, this textbook is designed for self-study or for use in the classroom. Thirty lessons, primarily intended to familiarize the student with the oral language through mastery of basic sentences and prammatical analysis, focus on everyday situational contexts. A review section and an Armenian-English glossary are included.

Godel R. An introduction to the study of classical Armenian

Godel R. An introduction to the study of classical Armenian. - Wiesbaden: Dr. Luilwig Reichert Verlag, 1975. - 139p. ISBN 3-920153-37-5 FOREWORD This book does not contain anything more than what its title promises. Its scope is limited to a description of the Classical Armenian language, and to an inquiry on its origin and growth. Both parts have been planned so as to balance each other; and, as a historical study on syntax, in the present sta...

Словарь
Martirosyan H.K. Etymological Dictionary of the Armenian Inherited Lexicon. - BRILL, 2009. - 988 p. As an Indo-European language, Armenian has been the subject of etymological research for over a hundred years. There are many valuable systematic handbooks, studies and surveys on comparative Armenian linguistics. Almost all of these works, with a few exceptions, mostly concentrate on Classical Armenian and touch the dialects only sporadically. No...

Vartanian V. , Vartanian M. Armenian Language Competencies for Peace Corps Volunteers in Armenia. - Washington, D.C. : Peace Corps, 1992. - 176p. The instructional materials for Armenian are designed for the language training of Peace Corps volunteers in Armenia. They use a competency-based approach focusing on content, cultural context, and communication purpose simultaneously. Some are closely tied to work tasks, others to daily communication...