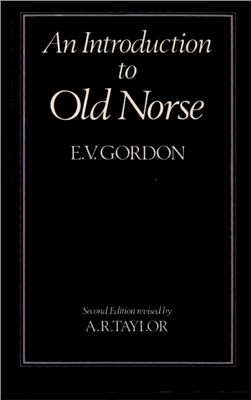 
This is a very rich book with a great reputation, but somewhat difficult to work with because of its format. Personally, I have not finished it, mainly because I needed a more extensive grammar.

"An Introduction to Old Norse is an English textbook written by E.V. Gordon and first published in 1927 in Oxford at the Clarendon Press. It has been reprinted several times since. The Second Edition was revised by A.R. Taylor. The book is commonly accepted as a standard text for any student studying Old Norse. It includes a long introduction, a short grammar of Old Norse, a glossary, an index of names and selections from the Elder Edda as well as a number of other sagas (all in Old Norse).

The introduction of the text traces the literary history of Old Norse, and describes the literary merits, historical accuracy, and compositional style of Old Norse texts. In it, Gordon draws comparisons to other Medieval languages and texts, such as the Anglo-Saxon epic poem Beowulf.

The central part of the book is composed of selections of Old Norse texts, including the entire text of Hrafnkels saga in the Second Edition. Other selections include the Eddic poem ?rymskvi?a, and parts of Hr?lfs saga kraka. Both East Norse and West Norse are represented, and there are also runic inscriptions.

The grammar portion of the text is written with the understanding that the reader would be familiar with linguistics, particularly those of Germanic languages. Verb conjugations are given in accordance with stem class, and Gordon often gives the historical reasons for particular changes in word form. There are also notes on the text selections, particularly glosses of difficult lines, as well as notes on differences between branches of Old Norse, both phonologically and in writing.

It includes a comprehensive glossary that often includes cross-references to specific paradigm numbers, including a portion of names that occur within the selected readings. Various illustrations occur throughout, typically of Viking and Scandinavian-related halls, weapons, etc. "
Смотрите также

Словарь
An Icelandic-English dictionary is based on the MS. collections of the late Richard Cleasby. Enlarged and completed by G. Vigfusson. With an introduction and life of Richard Cleasby by G. Webbe Desent.

Faarlund J.T. The Syntax of Old Norse: With a survey of the inflectional morphology and a complete bibliography

Oxford University Press, 2004. - 318 p. This book offers the first account of Old Norse syntax for almost a hundred years and the first ever in a non-Scandinavian language. The language of the Vikings and of the Old Icelandic sagas is the best documented medieval Germanic language and the author is able to present a comprehensive analysis of its syntax and overviews of its phonology and morphology. He supports his analyses with examples taken fr...

Valfells S. , Cathey J.E. Old Icelandic: An Introductory Course. - Oxford University Press, 1981. - 404 p. Introduction There are, generally speaking, two types of students of Old Icelandic: those who are interested primarily as linguists and those interested as literary scholars. Old Icelandic is designed to serve the needs of both. Their needs, however, are—to a degrees— incompatible. But the groundwork for either scholar is the language itse...