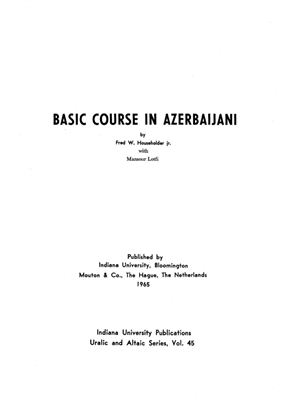 This book is designed to help you to lea spoken Azerbaijani. This language is the mother tongue of roughly 5, 000, 000 people almost equally divided between Southe Azerbaijan, which is a northe province of Persia, and Northe Azerbaijan, a Soviet Socialist Republic on the weste shore of the Caspian Sea, in the Caucasus region.
The dialect presented in this book is as closely Tabrizi as possible considering the fact that it is supposed to be at least intelligible in all parts of Persian Azerbaijan. Because of the relatively minor importance of dialect differences in general it can serve as a means of communication in most parts of the Azerbaijani area although people in the extreme outlying districts may have their difficulties, mostly because of vocabulary.
Differences in phonology, morphology, syntax, and vocabulary are mentioned wherever feasible and a special chapter on the Baku dialect, which was prepared with the help of Yusuf Kachramanoglu from Baku, appears at the end.
The book is based in plan, form, and method on. the series begun in 1942 for the U. S. Armed Forces. The original draft was prepared in 1952-1953 and 1954, and used with one class in 1954.
All the Azerbaijani text of Basic Sentences, Exercises, and Conversations is the original work of Mansour Lotfi (of Marand). The Basic Sentences and some Conversations were composed orally by Mansour Lotfi and transcribed by Fred W. Householder jr. ; the other Azerbaijani items were written by Mansour Lotfi, checked and the transcription revised by Fred W. Householder jr. All transcriptions ('Aids to Listening'), therefore, represent a particular rendition by a particular speaker at a particular time. Other renditions are, of course, bound to be different. Salim Neysari of Tabriz was consulted and many points checked with him. Nothing in the book is translated from English except some of the bracketed synonyms; all English Equivalents are translated from Azerbaijani.
The Pronunciation and Analysis sections and the chapters on Spelling are the work of Fred W. Householder jr. , checked with Mansour Lotfi. The examples cited there are largely taken from the text itself, but many are drawn from other sources — Voice of America broadcasts, Azerbaijani books and magazines, texts published by Karl Foy in M. S. O. S. 6, 197-265, and one or two other periodical articles.
The whole book was condensed and rechecked by Gerd Fraenkel in 1959-1960 with the help of Parvin Atai from Tabriz who also helped considerably with the preparation of the vocabulary. Final proofreading and completion of the vocabulary were the tasks of Harold Battersby in 1963. The book was designed and composed by Suzanne Brown. Since this revised version has never been used with a class, it undoubtedly contains many errors and infelicities, for which we apologise in advance.
We are indebted to the Center for Applied Linguistice for a grant which expedited the publication of this book.
Azerbaijani is a Turkic language, very closely related to Turkish, Turkmen, Turki of Easte Turkestan, Uzbek, etc. Its relationship to Turkish is about as close as Danish to Norwegian. They are to some extent mutually intelligible.
Похожие разделы
Смотрите также