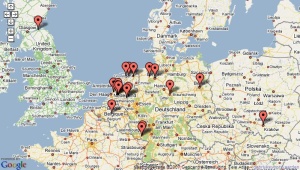 This course is the extended form of the course of three lessons I had before. It has been made after the exemple of my successful course Westfrisian, which has over a thousand visits per month.

The 15 lessons include the 197 most frequent words, thus covering 65% of daily speech. In between many other words and forms flew in in order to make good talks; the word index now contains 478 of them. I hope that in this way one will obtain a good starting knowledge of practical speech. A last lesson will treat some special objects.

For all lessons I considerably increased the number of exercises*, thus giving the user the possibility to work with the language themselves in order to get more feeling for it. Already from the first simple lesson on one is urged to join a talk!
*) There are over 600 exercises in total, more than half of it being "programmed", that is with built-in correction.

For each lesson one may call a seperate word index showing the newly acquired words with the English translation in the proper text and possible remarks conceing more general use.
Also a "growing grammar" is available, where the new words are arranged in a grammatical scheme, resulting in a general "grown grammar" at the end, with a special survey on verb inflection and numbers.
At any time the first appearance of a word or a meaning in the course can be found by the alphabetical index.
Also surveys are available of Saterfrisian spelling and of pronunciation. At the end, one is directed to material for further study.

My shining example by making these courses were the on-line courses in Breton.
For the exercises I owe a lot to my experience as a teacher for Dutch as a second language for foreigners.

About the scheme of the course: Starting with a quite simple text in the first lesson, the level is gradually increased during the course. In each lesson the student is first subjected to Saterfrisian speech without written text, after which he is asked a few questions in order to encourage his enterprise. Then he is asked to say after a speaker and to play that role in a talk. So the right pronunciation is exercised without being hampered by the written text and one may already get a better feeling for the contents and obtain the ability to answer. This will be more the case in the later lessons, where the texts are too long to be well remembered, which forces the user to improvise.
The same is repeated with the written text, where the student is asked to consult the vocabulary of new words and his growing grammar. After that follows a number of exercitions, like translating, understanding, true/ not true, making a good sentence, type the right word, and write and speak. So the student is intensively occupied with each text in order to lea the language in a natural way.
For the sake of clarity, separable verbs have always been written apart, e.g. f??re gunge instead of f??regunge 'proceed'.

'Saterfrisian shows small dialectic variation. This course is based on the dialect of the central village Ramsloh. Some variations are indicated as U (Uut?nde/ Str?cklingen), S (Scharrel).

I would like to thank Mrs. Margaretha Grosser for her indispensable help,
as well as Mr. Thomas G?ppel for the use of his website Webstelle Allezhop.de.

When you have any further remarks, then please do not hesitate to write.
That applies also for technical problems.
Textsize can be set by clicking View and Text size on top (in Inteet Explorer).

(Курс западнофризского языка П. Крамера, 2001-2005, 15 уроков, на датском, немецком, английском, французском, нидерландском) This course is the extended form of the course of seven lessons I had on this place since May 2000. That course was rather well visited: out of 859 people visiting page 1 of the English version 121 downloaded all lessons. For the Dutch version these numbers were 185 and 41 (Yahoo Stats 4th April 2001). I also got a number...

2nd edition. - Fryske Academy, 1999. - 147 p. Preface A great deal has happened in the world of Frisian linguistics since this book was first published around fifteen years ago. Ideally, a second edition of this grammar would be thoroughly revamped to take into account all of the work that has been done over the past years by linguistic researchers, especially at universities in the Netherlands and the Fryske Akademy (Frisian Academy). Unfortun...