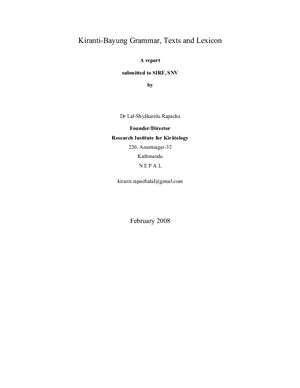 Kiranti-Bayung is a minority language spoken by a dwindling number of Bayung speakers of Wallo Kirant 'Hither/Near Kirat' from Okhaldhunga and Solukhumbhu districts of easte Nepal. Like Kiranti-K?its (exonym: Sunuwar/Mukhia) a sister-neighbouring language, Bayung is gradually vanishing as about 900 adults and fewer youths have the knowledge of this language. The study deals with Grammar, Texts and Lexicon of Kiranti-Bayung. Specifically, the study aims i) to collect maximum number of lexicon from the local native speakers and previous work; ii) to record maximum texts on folklore; iii) to analyze the grammatical features of the texts; and iv) to prepare a reference grammar. This study thus has collected more than two thousand lexicon in order to prepare its corpora. Kiranti-Bayung, as in other Kiranti languages, lacks grammatical gender. It has dual number along with singular and plural and is a suffix-dominant language. Kiranti-Bayung has a rich cultural lexicon with complete lexical items of counting numerals. The verb morphology of Kiranti-Bayung has a rich inflectional system. Its folklore is also rich in terms of ethno-history, ethno-culture and anthropology of the glorious Kiranti people. Further, Kiranti-Bayung vocabulary is enriched by its indigenous culture and indigenous technology.
Acknowledgements
Unit I Research Setting
Unit II Kiranti-Bayung Grammar: Historical-comparative Sketch
Unit III Texts in Kiranti-Bayung: Genesis of Socio-anthropology
Unit IV Kiranti-Bayung Lexicon: Nature and Need for Documentation
Unit V Measures for Language Vitality-policy-planning
Unit VI Summary and Findings
Appendix I: Genetically related Kiranti langauges of easte Nepal
Appendix II: Kiranti-Bayung homeland
Appendix III: Bayung mother tongue by district
Похожие разделы
Смотрите также

Издательство: Baptist Mission Press Год:1919 Количество страниц: 224 Язык: Английский Формат: PDF In tlie first edition this grammar was published as the first part of a " Manual of Colloquial Tibetan," tbe second part consisting of an Euglish-Tibetan Colloquial Dictionary. In this second edition both parts liavenot only been revised, but have also been considerably enlarged. The map accompanying this edition —the latest from the Indian Survey D...

This book is intended to describe the reading of texts in the classical Tibetan language. It is not a complete survey of all aspects of Tibetan grammar, although I have tried to include everything I thought it was important to know. It is intended to describe the READING of classical Tibetan; therefore it will not attempt to teach the reader to speak either Old Tibetan or some modern Tibetan dialect. Rather my aim has been to provide procedures f...

Издательство:TRUBNER & CO Год: 1883 Количество страниц: 59 Язык: Английский The present new edition of Mr. Jaeschke Tibetan Grammar scarcely needs a word of apology. As the first edition which was lithographed at Kyelan in 1865 in a limited number of copies has long been out of print, Dr. HOST urged the author to revise his grammar for the purpose of bringing it out in an improved form. The latter, prevented by ill-health from undertaking th...

This book was written to assist beginners not only to master the multiplicity of Tibetan grammatical particles and markers, but also to develop the skills to cope with the semantic component of Tibetan grammar. Part I comprises 8 Lessons. Lessons One and Two present the 30 letters of the Tibetan alphabet together with a description of how they are pronounced. Part II contains both lessons and and extended reading examples taken from novels, folk...

The liberalization of political and intellectual life in China and the rise of Tibetan exile communities throughout the world have produced a resurgence of spoken and written Tibetan. These developments, together with increasing contacts between Western scholars and Tibetans, have created a widening circle of English-speakers—in government, business, academia, and elsewhere—who need to speak or write Tibetan with precision and clarity. For these...

20 dialogues in Tibetan script - without transcription - covering topics from day-to-day living through romance and Tibet's political situation. The first 10 are translated into English. There are also (limited) grammar notes. 1996. 99 p.

Год:2007 Количество страниц: 72 Язык: Английский These pages are intended to provide the basic rules to build simple sentences in Tibetan, suitable to have small conversations or ask information. The first part contains simple grammar rules and many examples on how to use them. The second part is a collection of words and phrases useful on different occasions (visiting towns and monasteries, trekking on mountains, eating at the restaurant, etc),...